A long gap between the last post and this I know. I've been away and then doing some work on my own game and then some thinking about what (and who) this blog is for and then some idle procrastination.
All of us ask ourselves the same question, "How can I play better?" Then we log on and play some matches and then we analyse them and look at our mistakes. Then we play some more matches and so on. At least this way we don't get any worse and over a long period it will help us improve, but noticeably, not by much. After the first year or two, it's rare to make much progress. It looks as if this process doesn't work and I think that is because it isn't sufficiently focussed on the repeating mistakes. So, I am trying a new method on my own game and perhaps this would work for you too.
The method works like this. Go through your match, with Gnu or Snowie or ideally XG2, note the big mistakes and focus on those where you haven't understood what you should be doing and why. Ignore those where where you've had a good idea of what you should be doing, seen all the candidates and made an honest but understandable mistake. With the rest, try to put them into a category by type.A quick list might look like this.
Failed to be guided by the pipcount.
Played a doublet too quickly.
Rejected hitting loose on a low point (always a problem for me!).
Missed a cube by failing to use PRAT.
Failed to stay pure in a crunch situation.
Took a gammonish cube without being certain that it was right.

Once you have your list and it begins to fill up with repeat offences, you need to figure out why you are making these mistakes. Not concentrating enough? Playing when you are tired (or hungry, or thirsty, or intoxicated, or bored, or depressed)? Not really understanding the position? These are just some suggestions, your own list might look completely different.
To recap, you need to know what sort of mistakes you are making regularly, then identify why you made them and then learn how to avoid them.
Here's an example. A student of mine faced this roll. What's your choice? 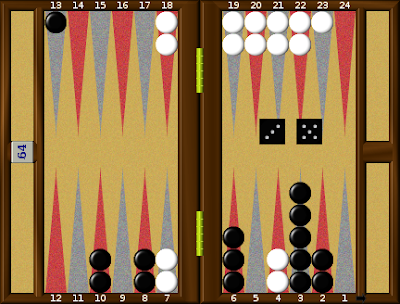 He played 13/8, 6/3. It looks fairly natural, but it's an auto pilot play, of the type that we all make when we are feeling lazy. It's a particularly bad time to blunder because this game is arriving at the Crunch Point, where the game will be decided one way or the other. Either Black will get home safely or he'll leave a shot and be hit.
The best play by a lot is 13/10, 6/1. A highly skilled player with a very advanced positional sense might get this right by thinking, "It can't be right to pile a sixth checker on the 3pt. I may very well want to hit something in the bear in, so I'd better slot the ace and then one of the spares on the 3pt will at least have something useful to do." A more pragmatic player or even the same player might think, "I'll make the safest play for next turn, it's usually a good guide." Then he'll read the numbers. This just means looking at all his next rolls after each of the candidate plays (there are only two) and seeing which of them leaves a shot. Did you do this before choosing your play. If you didn't, go to the back of the class! Do it now and you will quickly see that 13/8, 6/3 has 14 blotting numbers next generating a total of 234 hits, while 13/10, 6/1 has only 9 which generate 126 shots. One of these, 5-5, you'll leave voluntary double shots although you could play safe but with much greater extended jeopardy.
So here is a bearing-in error, made by failing to read the numbers. How often do you read the numbers? If the answer is never, then it's time to learn and the only way to do that is to practise, by looking through your matches for bear-in positions and counting them up. Do it with pencil and paper at first, then graduate to doing it in your head. Do it until it is easy and then do it in matches until it becomes second nature to always do it. It's going to swing a lot of losses into the win column. Note that in most cases (and particularly here) you'll need to multiply the shot numbers with the number of shots that they leave to get the definitive answer.

News. Fibsleague season 56 ends on the 27th of April. Master A is still very open with a lot of matches undecided and a lot of players in with a chance of catching current leader BluNick (Italy) who has 8-3 with a match to play. Master B is however decided, with Backwoods (Finland) and BushSucks (Germany) through to the play-offs yet again, so congratulations to these perennial strong men. At the other end, jackdaddy and blotsalot (both USA) are relegated with magic_one, DeaDice (both USA) and Gammonrider (Germany) battling to avoid joining them in Gold next session. This is a very good time to register for the league and enjoy regular tough matches in a well run league, for which we have to thank Franck del Rio, better known as Tomawaky, who is now in his eleventh year as director. Take a bow Franck!

Tomorrow we'll look at another blunder and how it might have been avoided. Until then, enjoy the game!
Posted by dorbel at 04:36

I'll be glad to see the back of season 56 - started with seven wins out of eight in Gold A, looked like certain promotion, then lost the last four all in the same disastrous weekend. GNU tells me I wasn't significantly outplayed in any match, and lost two to oppos with twice my PR, which is small consolation! :)

I've always reviewed my matches post play and attempted to categorize them. This is occasionally productive but for those of us with a higher error rate the result tends to be that errors are made in a broad set of categories in both checker and cube play. While this may sound like the first step in a 12 step program it doesn't appear to play out that way.

I'm starting to think that a focused study of a specific area of the game is more likely to be more beneficial than ongoing triage. In my case, there's still plenty of fundamentals that need fixing.

It may very well be that if your error rate is low, your fundamentals are solid and your weaknesses are specific that a divide and conquer approach will work but that hasn't been my personal experience to date.