So, the answers to my April Fool's Day Quiz. Five positions and no, it's not a joke, I really did blunder all of these in a single match. Nothing like public confession for keeping you on the straight and narrow in the future. Here they are again. 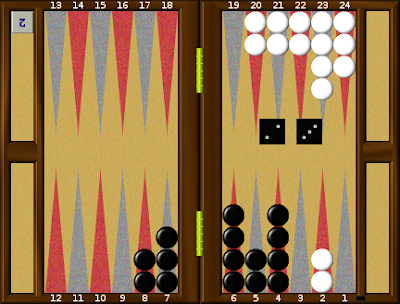 If you were too lazy to do the pipcount, you'll struggle with this one. Black trails by a pip (82-81) after the roll, so mandatory to continue to block sixes. I had no excuse as pipcount was on when I played it, so this has to go down in the "Sloppy and Careless work, see me" column. The best play is the simple 7/5, 4/1 but the imaginative 7/5, 6/3 isn't far behind. The 3pt could yet be very useful and White won't be hitting unless she can roll 1-1 or 1-6. Yes, hitting with 1-5 is wrong. 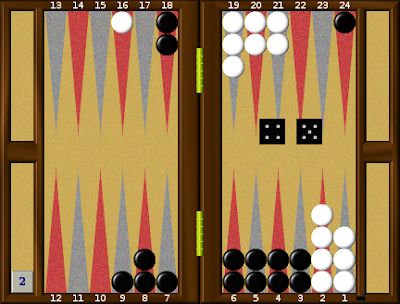 By far the toughest position in this quiz, the rollout is quite clear and Black must play 18/9! 9/4, 7/3, which is what I played is too feeble. If White is going to escape with a five or six, Black must simultaneously slow himself down by allowing the hit. Plays like 18/13, 18/14 also do this, but five blots is a bit too loose, boosting White's wins and gammons by significant amounts. Positions like this lie well beyond my powers of analysis, but it is a very instructive position to practise. Play from here, try some different plays, analyse, get a feel for it. At least you don't have to worry about the cube play. Hard to see Black ever turning it here. 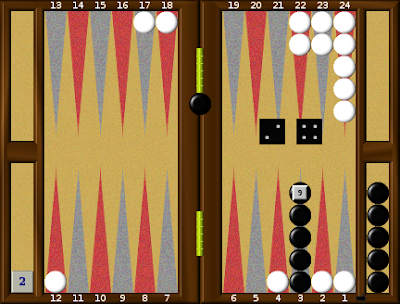 We've had a careless blunder, inexcusable and a very tough play blunder so far. Here I made a "Too clever by half" blunder, opting for bar/21, 3/1*. My thinking was that if I could knock White off the ace point and make it later, it would make the bearin and bearoff much safer. This is true as far as it goes, but I can always take that risk later if I have to. Now is not the time, as two men back could be very dangerous. Big blunder, good old bar/19 is correct. 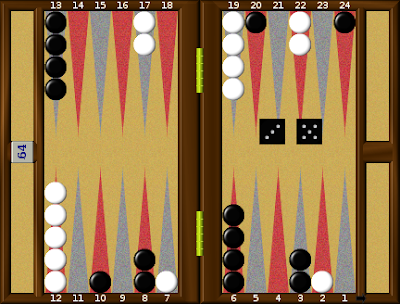 I played 10/5, 8/5, another blunder like the last, imaginative but too much risk for the gain. It may have been sparked by the "I've seen something like this recently where it was right" syndrome, to which I am particularly prone. I don't mind that too much actually, as it often pays off, but be wary of relying on it. Use it as an option if you really can't choose something better.
13/10, 13/8 is quite a decent play but a very small error. Black needs to hit something and you can choose between hitting one or two! 10/7*/2* and 13/8, 10/7* are neck and neck in the rollout. I am always very reluctant to start speculative attacks in cubeless games where I can't win a gammon, but here it works just a little better than the quiet play. 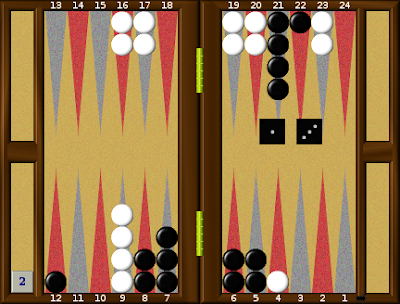 Lastly, one from the "Too ambitious" school of blunder. I played 12/11, 7/4*, but the quiet 12/8 is better in the circumstances. My play wins the most games for me, but White's deadly gammons jump from about 20 to 29, so clearly I shouldn't be risking that. Sometimes backgammon is just about cutting your losses and living to fight another day.
Thanks to Julia, Clem and boop for having a crack at these. You can see their ideas in the comments to the previous post. Join them next time, the more the merrier.

Lots of action already in the Spring Open, particularly for sita (Matthias Krings) and yes (Thomas Brizendine) who are off to a flyer with wins that take them into the third round. You can follow this tournament direct on http://www.escoffery.com/main.txt .

We'll have some more dorbelblundas to look at tomorrow or thereabouts, so I look forward to seeing you again. Bring peanuts. Until then, enjoy the game!
Posted by dorbel at 01:36