Well big thanks to both the readers who posted comments for us and smaller thanks to those who gave me their answers on Fibs and no thanks at all to those who couldn't be bothered! This is not a Dark Ride, you need to participate! 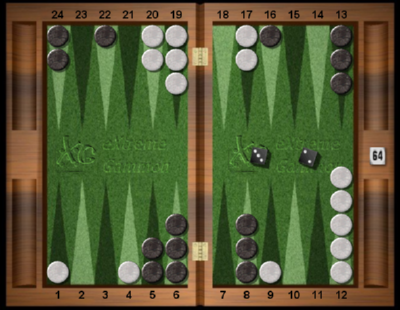 
Just sitting on this position with an ultra quiet play, 24/22, 16/13 is not really an option. Black does need to hit White off the 4pt, as you usually do when your opponent has a blot at the edge of your prime. You want to make it and you don't want her to make it. Black can't be doubled and loses hardly anything by being gammoned, so he should be playing with a lot of freedom anyway. There are three plays that are slightly better than the quiet play, 8/5, 6/4*, 16/13, 6/4* and 6/4*/1*, all very small errors costing about 0.03ppg. I wouldn't argue with any of these plays if a doubles partner wanted to make them, but the standout best play is 24/21, 6/4*.
Phew, five blots, can it be right? It can here because White is unusually short of checkers to attack, with only seven checkers in the zone and an awkward stack on the midpoint. This maximises Black's opportunities at the back, with enhanced chances to anchor, escape or hit in the outfield as the dice dictate, at a time when White can't mount the sort of response that usually inhibits such a wide open play. 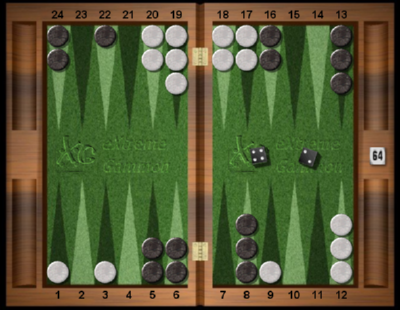 The same game later. Actually this isn't too hard. 24/22, 13/9* is best, hitting and improving the anchor. My student played 13/9*, 8/6 but our correspondents didn't fall for that. If you did, 8/6 looks more flexible for the attack, but with only eight checkers in the zone that attack isn't coming soon and Black doesn't really want to break the 8pt to hit. Also, that spare may be useful to make the bar, so it has a dual purpose where it is. Three checkers back always argues powerfully for a high anchor anyway. 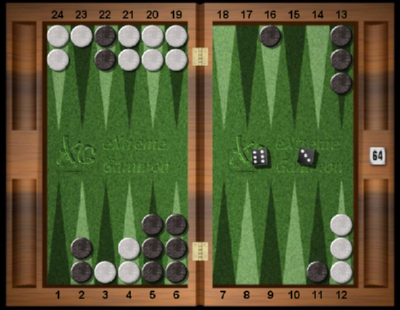 This is a tough play to find. I instinctively liked 16/10, 13/10. It's usually good to make the point six pips away from the opponent's anchor. That play is just about equal with 22/16, 6/3* and both are well ahead of anything else! Phew again, what is going on here? Leaving your anchor and hitting loose behind White's anchor, with the race evenly poised and White having a stronger board! Sometimes answers defy my ability to analyse even with hindsight, so if anybody has any clues about this one I'd be pleased to hear them.
Here's what I think. White's shortage of any spares anywhere near her home board and the blot on her 2pt are of course factors which make the loose hit less dangerous than it otherwise might be, but you do have to ask, what does Black gain from this risk? It's this. Neither side at present has any points made in the outfields, apart from the midpoints and this is a big positional weakness for both sides. Either of the best plays remedies this for Black and with the game so evenly poised, it's hard to say whether the defensive 16pt or the attacking 10pt are going to be more useful.
Even when games reach this sort of tense stand-off, with a hard play every turn, we must keep trying to address severe positional weaknesses, even at the cost of some risk. If we don't do that when we can, then the game will only get harder as it goes on.
I learned a lot from these positions and if you did too, then it's well worth the effort. Keep writing in those that do and start writing in those that don't! It's a better blog with your contribution!

On August 31st at 2300UTC on GridGammon, two of the elite will go head to head for a 13pt IIBGF match. They are Matvey "Falafel" Natanzon of Israel and Mochizuki "Mochy" Masayuki of Japan. This match will be recorded, annotated by me and comments from both these players will be added. It will be available with the annotation and comments as an XG file for $10 or as a Word doc. for $15. Versions as Gnu or Snowie files can also be made if there is a demand at $10.
This is your chance to see how the very best players in the world think and play. It should be a terrific learning aid.

In Position Three, the first thing I looked at was breaking anchor. Though the pip count is close, if we look at the position as a whole, we see that Black would like to get his back checkers going in order to stay flexible and connected. If Black hangs on to the anchor now, what is his plan for getting them out of there? The only trouble with 22/16 is that the only plausible 3 is 6/3*, which seems risky. So eventually I settled on 16/10 13/10. However, 6/3* isn't excessively risky. One has to look not just at the static strength of White's board (four points) but at the dynamics. White has a blot in her board that will not be easily cleaned up. And if White dances or enters on the 4pt then Black will have gained considerably.

the absence of gammons for white gives the edge to the hitting play by black....even after making the ten point white has 9 hitting numbers with the better board..hitting off the 3 point only gives white an extra 4 shots and gains on the 9 dances and also gives white some bad enter numbers as well...big gains also in black making the 3 point when missed