One From The Vaults.


Back in the Old Days, before the bots took over the task of teaching the world to play good backgammon, there were expert players and analysts who presented their matches for us, so that we could learn. How good were these players? How good were the analysts? Just running their matches through a modern bot and looking at numbers, they weren't great. Considering that they learned to play without all the aids that we have, they were terrific!
In the next few posts I am going to look at a match played in Monte Carlo in 1981. The players were both at the top of the tree in those days, Stanley Tomchin and Chuck Papazian. We have the match because it was recorded and annotated by Kent Goulding in his series "Backgammon with the Champs." Let me say before we start though, that no comments that I make about the plays or Kent's commentary are in any way intended to poke fun. These were great players and the analysis is terrific. We stand today on the shoulders of giants.

Play in those days was different. The checker play was very pure, concentrating on keeping all your checkers in play much as we do now in dmp games. They slotted the 5pt a lot, noticeably with an opening 6-2 as well as aces and an opening 5-3 was played 13/8, 13/10 by most people. These plays are occasionally seen even today, although now known to be weak. Oddly neither of the players in this match minded hitting on the ace point, but usually only as a diversion. They didn't like to actually make it. In general though, their checker play was excellent, but in comparison to modern players their cube action was poor, with both players passing a lot of easy takes. This 19 point match lasted for 27 games because so many games finished at the 1 level. 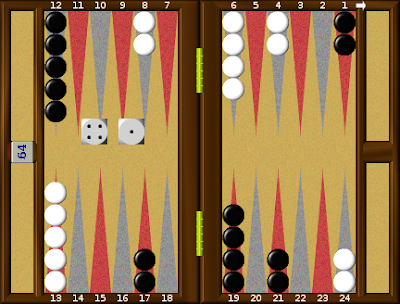 I expect (and hope) that you picked 13/9, 24/23, unstack and split. White went for 13/9, 6/5 because that was the way that they played then, with a big emphasis on making the 5pt and building a prime. Can we say why that is wrong? It comits to one plan, building a prime, at considerable risk of being hit. The modern play is much more flexible, allowing White to develop one of several different game plans depending on what the dice provide next, without the same degree of risk. You could of course play 13/8 entirely risk free as far as being hit is concerned, but no more flexible next turn than it is now. That would be an error.
Many players in assessing the risk of a slot count only how many shots it takes to hit that blot. It's as important, perhaps even more important to count how much you lose when hit. If you slot the 5pt here and get hit, you lose 20 pips immediately and given that 11% of the time you then fan with four of your biggest numbers, 6-6, 4-4 and 6-4, a hit loses you three full rolls on average! That's a lot in a game that is at heart a race. How bad is the play? It costs you just about 1/10th of a point compared to the split play. That's a big error. KG thought that the split was a reasonable alternative, so we can deduce that slotting was widely regarded as the standard then for this sort of situation.

Well Black did hit and White did fan, producing this position with Black on roll. Before reading on, what's the correct cube action for both sides? 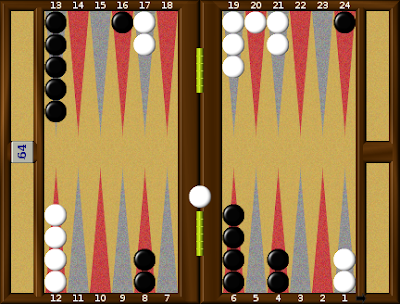 Black (Tomchin) decided not to double. This is correct, although he is nearly in the window. KG nailed this one, saying that giving away the cube was too big a price to pay for the small number of market losers. Would you double this? In the first game of a long match there's a lot to be said for a very aggressive double like this. Black will win about 62% from here including 24 gammons, to go 2-0 or 4-0 up. If things go White's way, Black will find out how well White uses a 4 cube, extremely valuable information at the start of a long match. Last but not least, you may get a pass! I've seen weaker doubles than this dropped. There are some later on in this match.

Later, White has to play 1-1 from the bar. What would you do? 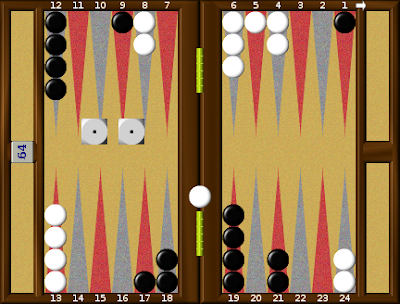 As a fanatical primer, Papazian entered and made the bar and the 5pt. The modern players, knowing that three checkers on the 24pt is deathly will probably make the 23 and 5pts and they'd be right. Improving the 8pt to the 7pt isn't hugely stronger anyway.

A little while later the game moved on to the sort of priming battle that so often occurred then, because of the way that they played. Black is on roll. Is this the sort of thing that you double? As White, would you take? 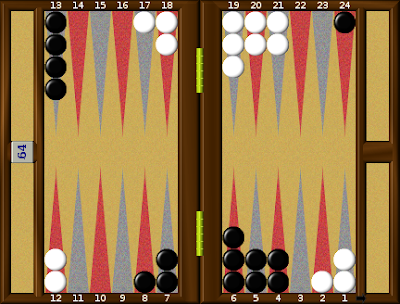 Black doubled, White took, correct action on both sides. The primes are identical, but Black has two extra outfield checkers to play with, which will mean that he will win the priming battle all other things being equal, because White will usually bust his prime first. White still has a lot of play himself though and note that cube ownership is very valuable indeed in prime/prime games, with the ever present possibility of the doubler going bust at any moment with a large awkward doublet. Also, White is at least anchored and can usually fall back on an ace point game if nothing else. KG thought that the take/pass decision was close and came down on the side of pass. That is a blunder, but an understandable one I think.

In this next position, Papazian (White) has to play 6-4. 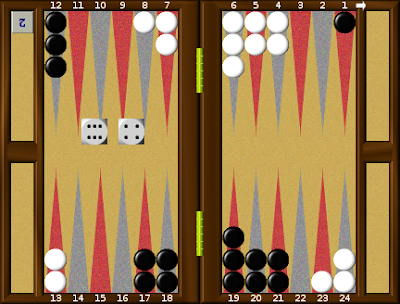 So fanatical were they in sticking to their plan, White plays 13/7, 13/9 here. Today, everybody would make the 2pt without even thinking about it. No shots, makes a point, preserves the midpoint, what's not to like? This play and the play of 1-1 earlier drew no comment from KG, indicating clearly that this was the accepted way to play, pure, brave and stick to your plan.
Modern players need to be more adaptable, switching from one plan to another as needed, often several times in a game!

I'd hate to show you just mistakes. See if you can find Tomchin's lovely play in this position, Black to play 5-2. 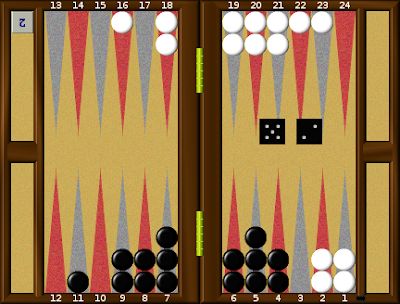 He played the elegant 11/6, 5/3, well ahead of any other play. White won't hit even if he does throw a 1, so the perfect slot, risk free, efficient and safe next turn.


We'll look some more at this fascinating match tomorrow. Until then, enjoy the game!

Note: I've switched back to using Gnu boards and ID's, as Gnu users by far outnumber ExtremeGammon users at present. However, I am using EG for the analysis. I'll let you know if it is ever widely different to Gnu.

I'll split here. It may not be the best move, but I like to split early so that I'm forced to get my ass off the ace point. The longer the game goes on, the harder it becomes to move off the ace. 24/23 13/9

I could slot both 5 points, but this seems to be leading with one's chin.

Oops. Reading down, I see that you give the answers. But now that I've started, I might as well play along. You'll have to trust that I'm not peeking.

Black is ahead in race and threats. That should be enough to cube. Whit has lots of counterplay, so I'll say take. D/T

Well, use one ace to enter and one ace to cover the 5. The other two could be played to make the 23 point, slot the 22, or make the bar. Slotting the 22 seems too risky. Making the bar gives white a good blockade, and since I tend to favor offense over defense I like that play (I'm not always right, and need to fine tune the offense/defense balance.) Making the 23 has the advantage that it puts immediate presure on the blot on the 17. I think I'll go for the anchor. bar/23 24/23 6/5

Stick says that prime vs prime is almost always a take, mostly because they're so volitile. So, I'll say that white has to take this one. Black is way ahead in the race, yet still retains better timing that white. I think it's enough to double, but need to check market losers: I'm not seeing a lot so maybe this is a hold. But I am seeing a few, so I'll push the cube. I'd be pleased with a cash. D/T

OTB, I'd just make the 2 point without giving it much thought. That probably didn't suit the "pure players" of yore, but it's what I'll do, even after thinking about it for ten times as long as I would have OTB. 8/2 6/2

OTB, I'd reflexively play 11/4. QF makes me look at 11/6 5/3. It slots the front of the prime, which is the point we want to make next. With two homeboard blots, white might not even want to hit it if she can, even without the two homeboard blots hitting destroys white's timing, and she's still stuck behind a full prime.

Thanks for the quiz! I'll look forward to the next one.

Nice set of positions, Paul! Regarding the last one, see this position for a similar theme.