All right, I know it isn't Friday, but you've had long enough. Thanks to those who used the comment feature for their thoughts and also those who gave me their answers on Fibs. 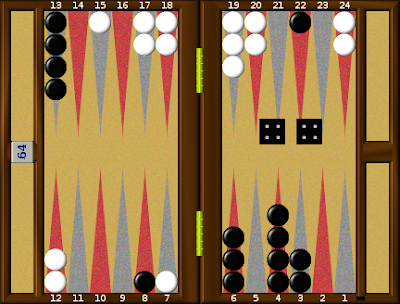 Here's a very useful tip. "It's usually worth leaving an outfield blot if you can use the roll to make a good point inboard". 13/5(2) puts some teeth into Black's board and will make White very wary of plays that leave blots. If you don't make this play and instead pick up your blot with something like 13/9(2), 8/4, 6/2, White will cheerfully attack your straggler with anything she can find to throw at it. In addition, you have burned your spare on the 6pt and stacked a fifth checker on the 4pt, so you have more or less trashed your chances of ever making a strong board in future. Politicians learn, "It's the economy stupid". We might say, "It's the board stupid". Make it and don't break it. 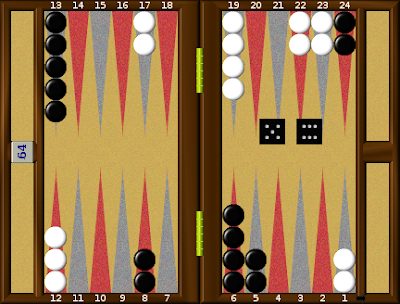 This one took me by surprise. If it isn't a quiz it takes a very strong minded player to look for something else after 24/13 and a very skilful player to identify the right play.
Here are the steps. Black still trails by 15 pips after the roll, so a racing play is NOT indicated. 13/11 adds a sixth checker to a point that is already fat. I know we do that on the opening roll, but then we lead by 11 checkers after the roll. Here we can find a much better play and it is 13/7, 13/8. This unstacks and puts two very useful checkers into the zone. White's 16 hitting numbers hurt much less than usual because of that big gap in the middle of her board.
Running does nothing to apply pressure on White. It doesn't try to rectify Black's severe positional defects, in fact it makes them worse. A third alternate is the old Kent Goulding play, 24/18, 13/8, which bids to make a high anchor or exchange hits, but this is weaker than running. When it works, Black still has to put his frontal position together, when it doesn't, you get cubed.
What can we learn from this? We still need to address severe positional defects (stripped 8pt, stacked midpoint), even when we are behind in the race and outboarded, in fact particularly then, otherwise the game just drifts away. 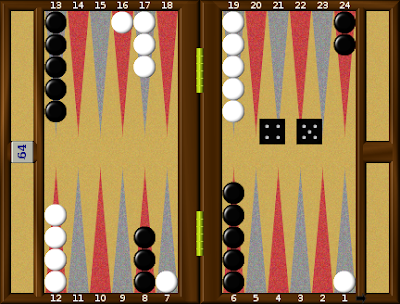 Dang, missed everything, can't make a point, what shall I do, run? 24/20, 13/8? Actually though, Black hasn't missed everything. Hitting loose on the ace point is not a play anybody likes to be seen making, but there are times when you have to turn Mother's picture to the wall and do the ugly thing. 24/20, 6/1* is the best play. This is entirely a diversionary play designed to take away half of White's next roll. You won't achieve much by it, because either she hits it (bad) or she misses it (also bad), but at least you've slowed her down a bit, given her a a few awkward rolls and defused some of her jokers. 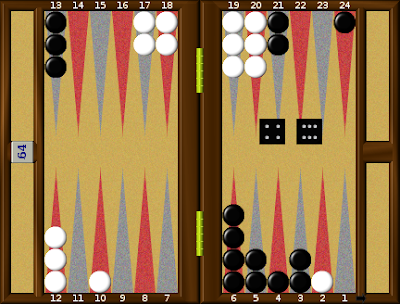 Black here is me and yes I played 13/3 but the wide open 13/7, 6/2* is best, by a lot. It leaves 23 shots and three blots but Black is anchored at the edge of White's front-loaded prime, so a few more checkers back isn't too bad. Be bold, when it works it's terrific, when it doesn't you're not dead. I wimped it, don't do as I did, do as I tell you. Fortune favours the brave. 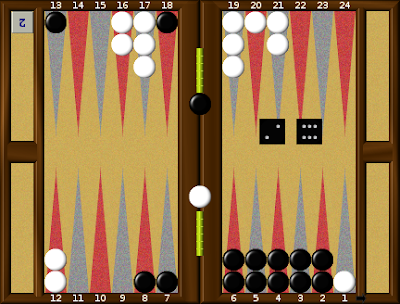 This one shouldn't keep us long, hitting is hugely correct, stopping White from anchoring and going for the closeout. This isn't always correct; if White's board was stronger then making the bar and attacking later could well be better, but here with White's blot on the 5pt and two point board Black has to blitz. Again Black is me and another pretty poor play as I played bar/23, 13/7. If you find yourself prone to these, perhaps like me you are too influenced by recent events. If I've been hit a lot lately and seen a lot of big turnarounds I tend to make these non-comittal plays and hope that the match will somehow win itself, which actually here it did, but that isn't the point. Try to approach each position with a clean slate in a nice objective way. Good trick if you can do it!

I do hope you learned something here, I certainly did. I'll try to find you something interesting for tomorrow. I have eXtreme gammon now, which is nice, but I'll keep on using this wooden Gnu board for the diagrams if that's ok with all of you. I can't say I like the XG graphics so much.

Nice quiz - I'll look forward to seeing more of these.

One piece of constructive criticism is that it would be nice to see some quantitative info on just how bad the "wrong" plays are. Yes, I know I can do a full rollout myself, and posting full rollouts isn't necessary. But saying "the alt play is a .3 error" instead of saying it's a "big error" is more informative.

In particular, I'm wondering how big a blunder it was to run with the 6-5. My hunch is it's probably somewhere around .05. It's be nice to see that kind of detail in the answers.

Of course, your commentary on why play A is better than play B is more useful than the numbers, so please keep that up.

Yes, fair comment. I can provide a little data without flooding the place with numbers and I should do that. One reason that I don't do this though, is that I actively want people to rearch these positions themselves, entering them into a bot, experimenting with them, doing rollouts, even playing some of them out by hand. That way what you learn is much more likely to stay in your brain than if you read what I write and pass on.
What you learn for yourself, you really learn. What you are told by somebody isn't education until you have done something with that knowledge to make that discovery yours and to own it. Does that make sense, or is this just a personal take on learning?