Well, thanks to the indefatigable ah-clem for giving us his thoughts. Let's see how his judgements compare with those of these top-class Japanese players and with the bot analysis. 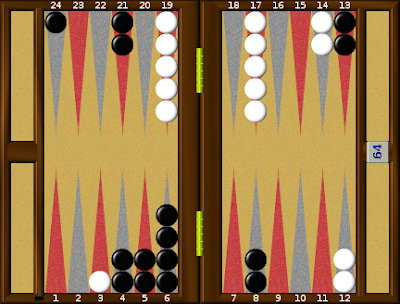 0-0 to 23, Black (Mochy) on roll and he doubled this and White (Suzuki) took. This is actually a bit early, a small error by Mochy. Black has three men back against White's one, which is a weakness and also trails in the race by 10 pips before the roll. Why then is such a great player doubling? Well he has the 6-5-4pts made while White has made nothing yet and he is also looking at White's very awkward stacks on the 8 and 6pts. This could easily go very wrong for White very fast and the momentum to be gained by winning a doubled gammon in the first game is valuable. If things do go White's way, Black is also going to find out how well White uses the cube, very valuable knowledge. With Black's high anchor to insure against an immediate bad sequence, I still like this double even though technically it is a bit light. 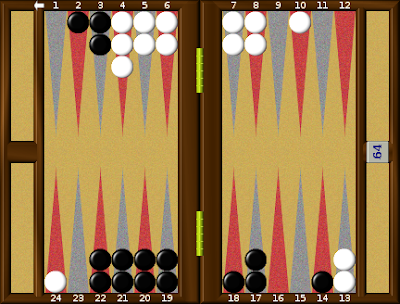 Of all mid-game positions, I find prime v. prime to be the hardest to evaluate, or even analyse coherently. Let's try! I think White's double is absolutely clear. He has one man back against three, he is shooting at a blot, he already has a five prime and if he doesn't hit, he has three checkers in the outfield that he can fiddle around with while he waits for Black's front position to crumble. In technical terms, White is said to have better timing. What does Black have going for him to justify a take? Well he is anchored at the edge of White's prime, he has a great board and he still has a potential six prime of is own. You also need to add to this the fact that cube ownership is more valuable in prime/prime battles than in any other form of the game. This is because one bad roll can see you go from underdog to favourite in a moment. Double/take is correct and that is what happened in the match. 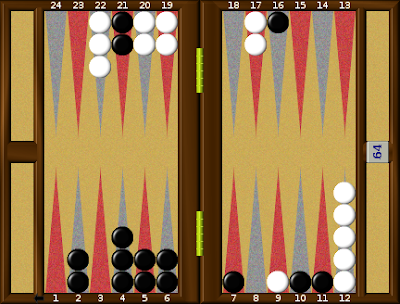 Black didn't double this, not sure why! 23 numbers put White in the air against a four point board. Anything that doesn't hit is an above average racing roll of 9 pips or better and gives Black a nice race lead with a high anchor. White's distribution is also very poor, but it's still an easy take. He's in good shape after the non hit numbers and will be a favourite to enter even if hit. Look out for positions that have this level of volatility, they cry out for a double. Double and Take. 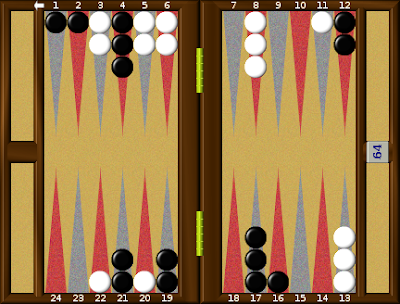 White must double this but Black can still take. He is anchored and anything may yet happen. Both sides have three blots, so it is extremely volatile, like the previous position. Double and Take. 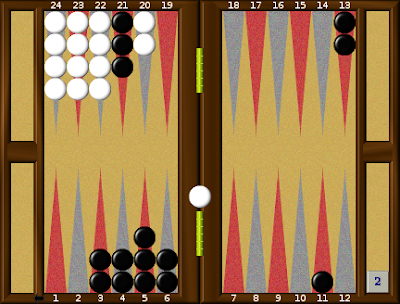 White has a huge race lead here but Black should redouble and this is already a clear pass! Why is Black's position so strong? If we look at what White needs to do to win it will give us a clue. He needs to enter, escape and make his way through an outfield which Black is about to flood with hitters. His task may get even harder if he enters with 1-4, 2-4, 2-3 or 2-4 and has to expose another blot and harder still if Black can make his bar point or 8pt. In effect, Black's position will get stronger roll by roll while White's gets weaker. Black didn't redouble, White danced, Black then did redouble and got a take in a position that is an even bigger pass of course, so Mochy's conservatism paid off big time. Redouble and pass is correct.
So there you have it, ah_clem made some mistakes but the 2010 world champion made some mistakes and so did the 2011 champion, so perhaps we shouldn't be too tough on him! I hope you found these interesting, as I did.
Hard game backgammon! Until the next post, enjoy playing it!