The player reaching 4-away, 2-away in a match can use the cube with a great deal of freedom, as the cube turn kills the cube and the opponent's gammons and activates his own gammons as match winners. This statement is so obvious to strong players that you often see them doubling on their second roll of the game. 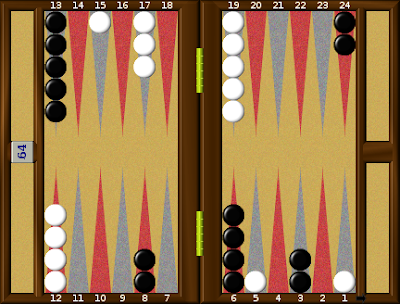 Here's a typical position with Black trailing 4-away, 2-away and on roll. He leads by a pip, has already made a point and White has three blots, a recipe for a strong cube at this score but most intermediates and many advanced players will leave the cube in the middle here. The intermediates as a group are reluctant doublers at the best of times and they routinely miss doubling opportunities. The advanced players know intellectually that they ought to be doubling but they fall victim to a crippling malady which I call Lastgamephobia. They don't want to put the match on the line, even though they know that they should.
If you too don't like to double this position and many like it, think of it as a money game, where your opponent is not allowed to recube and she is not allowed to win a gammon but she can lose one! Why wait? How can you gain? By cashing a point and going to 3-away, 2-away?
Black often gets these chances on his second turn and White usually has a take, although yesterday I saw the sequence Black 3-1, White 6-3 doubled and passed by somebody I would call a strong player.

Lastgamephobia strikes in many ways. On the same day I saw this redouble passed in the first game of a three point match. 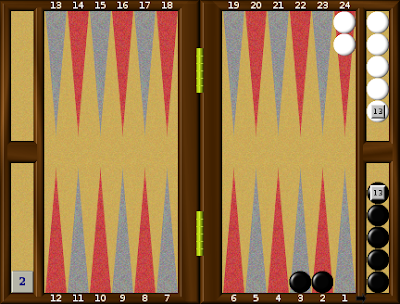 Actually Black, perhaps also suffering from the dread disease, had already missed two cast iron opportunities to turn the cube to 4 and put the match on the line, but when he turned it here, White passed. She elected to play at Crawford needs 3, with a Match Equity of 25% rather than take her 30% chance of winning the match from here.
Can you justify White's decision if she is the stronger player? Yes, if White thinks that she is good enough to win 56% (or better) of one point matches against a player of Black's strength, then she might be right to pass. This is though very hard to estimate. Ratings vary so widely that they are not much help as a guide and there is also the fact that if you poll players after matches, 70% of them think that they were the stronger player!
The same principle applies all through our matches. Double early, double often. Better to make one small mistake with a cube that is a bit frisky than make a string of mistakes failing to double your opponent in and then cashing when you are too good, a sequence that you can see day in, day out anywhere the game is played. Be bold and above all, don't be afraid to make this game the last one if it is right to do so. I know two players on Fibs of roughly equal strength with the checkers; in tournaments and fibsleague I play both of them fairly regularly. One is a dashing cube handler, who turns the cube with boldness and isn't afraid to redouble aggressively too. The other is reluctant to double until he is very close to or actually past the point where it is a pass and never, ever recubes unless it is a pass. One beats me often, the other almost never does so. Guess which is which?
Enjoy the game!
Posted by dorbel at 00:39

There is one reason you may not want to double at 4a2a as aggressively as the bot says you should. A lot of positions that the bot drops at this score will be easy money takes and therefore will be taken by many players. If your opponent is likely to take next turn even though it is technically a drop, then you can't actually lose your market.