While we wait for the super computer at Dorbel HQ to process the millions of entries received for the Christmas Quiz, here's an interesting query from a reader trying out XG2 for the first time.
"I'm analysing a three point match, it's 1-1 and the analysis says that White should double here, even though she is an underdog in the game. Why is this?" 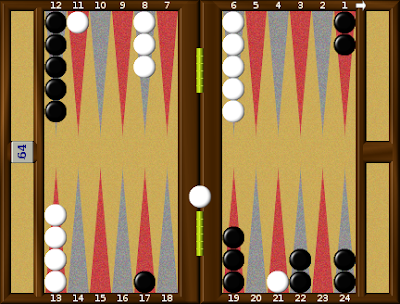 This is of course our old friend the 2-away, 2-away scoreline, which everybody claims to understand, yet so few below the expert level do. It is, so the experts say, always correct to double at the first opportunity. So, when White started this game with 3-2 and (correctly) played 24/21, 13/11, Black had an optional double, even though he was a very slight underdog. He should do this because he has nothing to lose by doubling. If he refrains from doubling, White will on her turn double anyway and Black will still have a take.
In the position above, XG says that White should double from the bar. This is because even if White dances, Black should double and White should still take! So, White can't lose by doubling, but what can she gain? If she rolls 4-4 and makes the best play, which is bar/17*, 21/17, 13/9 (not an easy play to find!) and Black rolls 6-6, White has actually lost her market and Black should pass!
If you play below expert level (98% of players), then doubling immediately at this score figures to be right for you. Occasionally it will be a minute mistake, of the order of 0.002 points, but not doing it risks making a much bigger mistake later, so turn it at the first legal opportunity. If you are an expert and playing somebody much weaker than yourself, you can get some mileage from delaying it in the hope of an incorrect pass later or occasionally even playing on until the end for an undoubled gammon! Don't try this at home kids! Trust me, at 2-away, 2-away, turn the cube immediately, even if your opponent starts with a 3-1. It's always correct.
Until the next time, enjoy the game!
Posted by dorbel at 03:08

It seems like -2,-2 is less understood now than when I first played online - perhaps because back then the few were all readers of rec.games.backgammon (where this subject came up regularly), and now there are far more casual players who never read forums or books.

Against someone who also knows the score well, shoving the cube asap is fine. Otherwise, if you have *no* market losers yourself, there's always the chance that he'll blunder and play on too far before cashing. Against an unknown quantity, I think I'd hold on to the cube until my second roll to see if he turned it at the first chance - and if not, assume there was a weakness to exploit. White is in that position in the sample board, on her second roll knowing that Black neglected to double before his 55. Black should have registered, of course, that 55 played 6/1*(2) 8/3(2) followed by a dance would lose his market.

Yes I take your points Julia. However, playing on in the hope of a wrong cube action from the opponent means that you also risk accumulating errors on your own side. In this position for example, Black doesn't lose his market even when White dances (!) but I agree that you will get a lot of wrong passes if she does.
I too often wait against significantly weaker players, but whether I gain or lose by this in the long run, I couldn't say.

OK, count that as a wrong drop against me - if it's a take it's certainly a very uncomfortable one!

What's your opinion of 2-point tournaments? If played properly they should be no different from 1-pointers (except the ratings formula gives you more credit for winning!), and I know some people regard 2-pointers as almost cheating, unfairly exploiting those that don't know the correct doubling strategy. So I'm surprised to see them running regularly on both FIBS and GG...

I have no problem with 2 point matches in a tournament. It's true that the real novices aren't aware of how and why the cube action differs from other scores, but the advice is out there for those who want to inform themselves. It's how you learn isn't it?

The main advantage for a human player who doubles at the first opportunity at 2-away 2-away is that you don't have to think about the cube anymore for the rest of the match. By relegating the cube decision to auto-pilot I can use my limited cycles to better use elsewhere.

That said, I'll sometimes wait until I actually have an advantage before turning the cube, especially against weaker players. Sometimes they never get around to cubing at all. But the simple advice to just cube ASAP and be done with it is sound.

"Occasionally it will be a minute mistake, of the order of 0.002 points, "

I think you are wrong here, even though a bot analysis might support this theory (a proper rollout will not!).

You might think that I am wrong anonymous and you may even be correct, but if you don't tell us in which position it is a serious mistake to double in a 2 point match, we'll never know. What opening rolls did you have in mind?

Hmmmm.... I read anonymous's comment the other way - I think he's saying that it is never a mistake, rather than being a small one occasionally.

If this is what he's saying, it could easily be refuted by giving an example. I'm too lazy to construct one myself (c:

ah_clem understood what I meant.