Play The Game Not The Player?

One of the difficulties facing every backgammon writer is the necessity to qualify every assertion with phrases like "except when" and "if you are the stronger/weaker player" and "depending on the score". There are many others. In order to make what we write intelligible, we have to omit these and rely on the reader to use his/her commonsense to imagine that these qualifiers are permanently in place. Here are some examples.
Recently I wrote, "The best modern players double like the bots do, aiming to turn the cube at the first moment that it is technically correct." I could, perhaps should, have qualified this with "when they are playing against somebody of their own class". As a reader commented, "Stick doesn't do this. He definitely changes his cube play to adjust to the strength and perceived playing habits of his opponent". Of course he does, but I would expect him when playing another world class player to get that cube across pretty much in line with what the bot suggests is correct. Another reader commented on Stick's criticism of people who "play like donkies" and cash positions that are actually too good. Recently Falafel commented on a cube, "I'm not sure if this is a take, but when in doubt I take". Is this good advice for all of us? The point I am trying to get across is this. Is what the bots do invariably and what the stars do some of the time against some players, good for us to follow? Given our more limited skill set, clearly it isn't. Let's take a look at some actual positions. 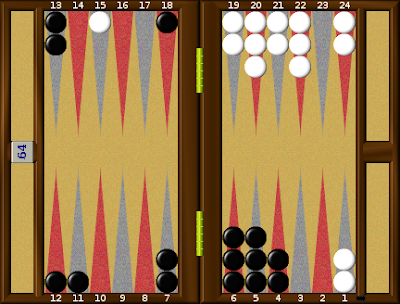 Black trails 6-away, 2-away. What is the correct cube action? This is a monster pass, nobody takes this, so Black's first consideration must be, "Is it too good?" It's not clear to me that it is. White has a five point board and leads in the race by 15 pips. She might hit a fly shot next turn or improve with 1-1 or 2-2 or if hit, anchor on the 22pt. Over the board I would say to myself, "I think this might be too good, but I'm not absolutely sure, so I'll double." Stick might say, "I think this might be too good, although I'm not absolutely sure, so I'll play on for the gammon this roll".
Who is right? We both are. His judgment of the position will be better than mine, both now and on later rolls when he faces the same question. Furthermore, he is likely to play from here better than me, so approaching or even achieving the theoretical equity of the position. For my part (and probably yours) doubling is a good practical play, putting a point on the scoresheet without having to play at all! The actual equity of this is about 1.05 points for Black if he plays on, so the theoretical cost of cashing now is 1/20th of a point. To me this is a reasonable price to pay to get a point that requires no luck, skill or effort from me before it goes on the scoresheet. Also, as so memorably put by Bill Robertie, occasionally somebody hallucinates and takes, after which your equity goes through the roof. One of these pays for 15 games where you have made a small error and cashed.

What about early and aggressive doubling? Take a look at this. 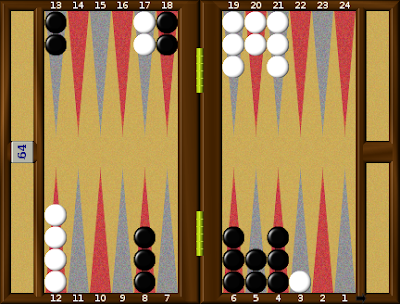 Black is on roll in the first game of a 13pt match. He leads by 4 pips. Is this a double? Black is Falafel, White is Mochy and Black doubles. Black threatens to lose his market with the sequence "make the 3pt, White dance". If this doesn't work, he might be able to keep White primed or just race. In the worst sequences, his bar point anchor will keep him in the game for a while yet. By a tiny margin a double is correct, gaining 0.007 points over waiting! Should we copy Falafel and the bot? Sure, why not? Be aggressive, up the ante now and with any luck you'll grab an early 4 point lead in the match. 20% of the games end with a Black gammon from here. Also, as in the first position, doubling allows your opponent the chance to make a big mistake and pass. Not very likely? I've seen weaker cubes than this passed, though not perhaps by Mochy!

What about "When in doubt, take"? 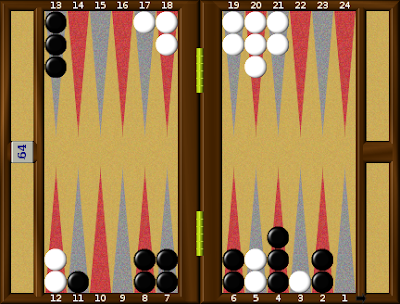 Money game, Black on roll, leading by 37 pips. The cube is pretty clear. What about the take? White has an anchor and a good board, is that enough? I can't say for sure that this is a take and because I usually tend to be too optimistic, I pass this. Falafel on the other hand might well say, "Not sure, so I take". For him, this is a good plan. With his superior checker play he will play close to perfectly from here and get the maximum benefit from cube ownership. Black only has to make one error to make the take correct and in fact the theoretical equity of this position after a take is 1.042. For me and perhaps for you too, a pass costing 1/25th of a point is a good practical option.

Every player can and should consider the practical benefits of adjusting his cube actions to allow for his own and his opponent's strengths. I hope that this article will give you some clues as to what you should be aiming for. Theoretical bot perfection isn't always the best practical option over the board, sometimes yes as in position 2, sometimes no as in positions 1 and 3.
Enjoy this wonderful game!
Posted by dorbel at 00:17