Here's Position One again. Black isn't too good to double because he doesn't have enough men in the zone to threaten a quick closeout. He must double now though, to avoid a joker sequence and this is a big pass for White. Playing on for a gammon is an error, if an understandable one, but taking is awful, a double blunder. If you voted to take this, then I suggest that you play it out 100 times with the cube on your side and disabuse yourself of the notion for ever. White will win this about 31% of the time, but lose about 40% gammons. 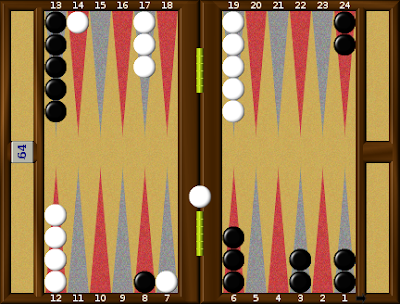 Position ID: 4HPkQUAzTvABMA
Match ID: cAkgAQAAAAAA
Here's Position 2, same sort of thing but now only one checker on the roof. This one is also double and pass. Again Black is momentarily short of builders, but more are arriving on the next bus and White gets gammoned too often to take. Periodically, there is a movement to claim this as a take, indeed some people do take it in practice, as does Gnu 2-ply, but it's wrong in my opinion, based on several long rollouts. Compared to Position One, White wins this one about 33% and loses about 39% gammons.
In both of these I attached a score of 0-0 to 9, but note that when trailing in a longish match these can quickly become viable takes for White. If she can make a high anchor in the next couple of moves, an aggressive redouble to 4 can net a surprising number of gammons of her own. Even in a five pointer, you can take position one quite easily if you trail 2-0. Not only does Black waste one of the two extra points that he wins with a gammon, but White's aggressive redouble eliminates all Black's gammons and even wastes one of the points for his plain win.
Those of you who like to research these things might like to make a little table of correct cube actions after an early 5-5/dance sequence. I could do it for you, but you won't remember it. Do it yourself though and you just might. 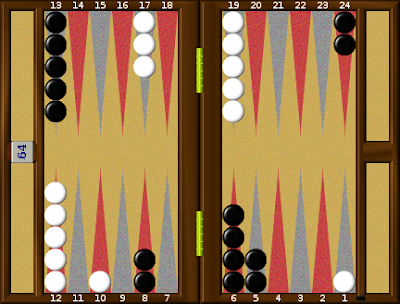 Now here's position 3, with Black on roll at the famous 4-away, 2-away score. You can double almost anything with a sniff of gammon at this score, because it kills the cube and the gammon threat is one way. So, this is a double and it is takeable. So close is this to a pass though, that the slightly inferior White play of 24/18, 13/10 with her opening 6-3 is a pass. How important is that? Not very. You'll probably meet this exact scenario five times in 25 years of bg and making the correct decision gains you at most an extra 0.2% match winning chances when it does occur each time.

Position 4 was the same position as above with Black trailing 2-away, 1-away Post Crawford. Black should play on for a gammon for the moment, but remain alert to doubling. If his gammon chances drop a lot and/or White gets to a position where she might become favourite, double/pass will be correct. For example, if from here Black rolls 3-3 and plays 13/10*(2), 6/3(2) and White then rolls 4-3 and anchors, then the double is probably correct. If White anchors lower down, it's probably right to keep going for the gammon. You can see that the playing on strategy, while clearly correct, does require a lot of good judgment, so if you think that this is beyond you, then taking your point now and going into the last game might be a good idea. It's an error, but not a large one. Too good to double/pass.

In the next post I want to show you some doubling positions from a private lesson. Easily the most common fault among players from novice to advanced is missing doubling opportunities, so I'll show you some of those and what we should be looking for to make the most of chances to up the stakes. That'll be tomorrow with any luck, so check back and until then, enjoy the game!