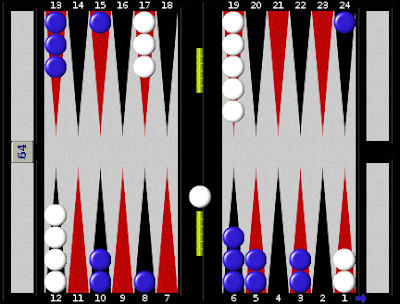 Blue is too good to double, although not by a huge margin and of course White should pass. Blue will have to constantly re-evaluate this and usually ends up doubling later. One of the nice things about using a bot (in this case Gnu) to rollout a position, is that it can tell you how many wrong takes you would need in order to make the double correct. Here, the figure is about 15%. As I can't imagine anybody taking this, playing on has to be correct. 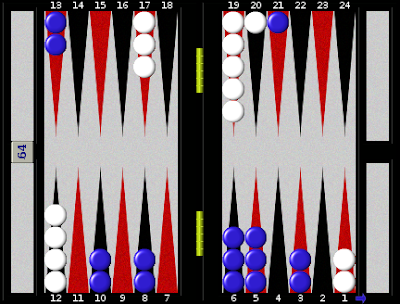 Pretty clear that Blue still has a strong double, but is he too good? By the narrowest of margins, an infinitesimal 0.015ppg, he is too good, so this is a nice reference position, one where you can't really make a mistake. If I find myself uncertain whether I am too good to double or not, then I always turn the cube. If it's a small mistake, as here for example, then it does at least put a point on the scoresheet. To me it has to be worth paying a small price to score a concrete point that I don't need to play for. Moreover, sometimes they take and then of course you are very happy! Gnu kindly points out that a 3% chance of a wrong take makes the double correct, so if you can imagine that there is a 1 in 33 chance of a take, then cubing is right. The last factor that you have to consider in these "Moet or Veuve" moments is, "How good is my opponent?" Actually, the White checkers here are being played by a World Champion, so nailing the point has to be correct I think. Against a very weak player, I don't know. Playing on allows for the possibility that he will make lots of weak checker players, but doubling allows him to make a huge blunder right now! It's your call really.

Now for the really tough one. 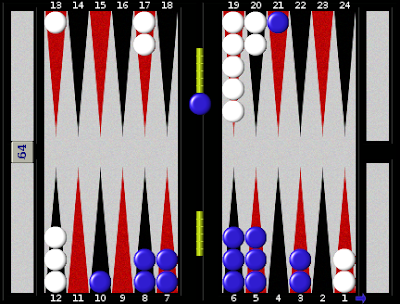 Blue doubled this one from the bar, correctly as it turns out. He is just inside the doubling window and can lose his market with a good sequence. It's very important to remember that market losers are a sequence of rolls, one for either side and also important to be clear that that sequence doesn't have to be very dramatic. In this position just anchoring can be a winner for Blue if White doesn't answer with a very good roll.
This one really divided a very knowledgeable gallery, with a surprising (to me) number going for double/pass, but the take is very clear. Not only is Blue on the bar, but he hasn't yet made his crucial 4pt and if the worst comes to the worst, White is at least anchored, so will be in the game right to the end if he wants. Excellent double though; over the board I wouldn't have doubled if I had got to this position, which I wouldn't have done because I would already have cashed and be playing game two!

I'll try and find you some more positions from this match, as I am currently working through a full annotation of it. Until tomorrow (possibly) enjoy the game!
Posted by dorbel at 09:16