Which Point Should I Clear?

I promised you some cube positions from a private lesson today, but I just want to polish those a bit before putting them in the window, so here's a nice position from a Dutch reader. It's a money game, how should Black play 5-4? 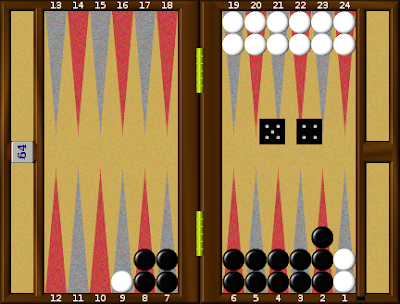 Actually, the first thing to note about this position is that for money, Black should have doubled before this roll and presumably for several rolls before that, because money games are invariably played with the Jacoby rule, which states that you can't win a gammon unless there has been a cube turn. This is a huge pass, so Double/Drop. What about for match play? Curiously this is a very valuable match play reference position, where Black's equity is 1 point whether he cashes now or plays on for a gammon. As doubling secures the point for certain and playing on is worth a theoretical point that will require some skill to acquire, then to me, doubling is clearly correct. Worth remembering this one.
Now to the play. Lucas, playing Black here argues strongly for 7/3, 7/2. His reasoning is that he doesn't want to clear the 7pt later against direct contact with the anchor. If he plays 8/3, 8/4 he can see that 6-5, 6-4 and 6-3 next turn will leave a direct shot and that even if that is missed he has lots of bad sixes next turn as well. It's worthwhile to quantify the immediate risk to start with. 6/36 shot numbers multiplied by 11/36 hits equals 66/1296, a 5% chance of being hit in other words. Obviously playing 7/2, 7/3 reduces this "next turn" risk even further, but it does bury two checkers deep in the board, increasing the likelihood of leaving shots later when Black has to clear his stripped high points. In other words, clearing the 7pt first is less immediate risk and more later risk and as it happens, the two balance out almost exactly! It doesn't really matter which you play.

A subsidiary question. If Black plays 8/3, 8/4 and then on his next turn leaves a shot on the bar which White hits, can White double (or redouble) while she still has a checker behind Black's five prime? It depends on how much time White has left in which to throw the escaping 6. 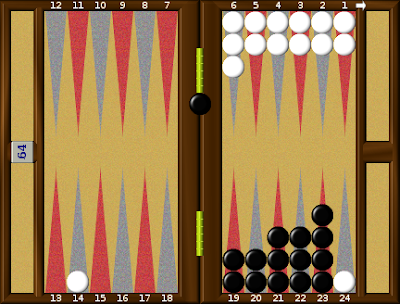 It might look like this, if Black cleared the 8pt, White threw 6-4, Black left a shot and got hit with another 6-4. This is exactly a marginal take/pass so more timing for White, Black should pass, less timing and Black can eke out a take. It's much the same for a recube if White owns it. I assume the start of a longish match, but of course scores may radically affect either decision. Again, an excellent reference position to remember. If your brain works in that way, you might like to collect these two and start a collection for revision sessions.
Nice position, thanks Lucas. I quite like this close focus on a single position, rather than looking at three or four at once. Is this better for you too? Let me know, feedback is always appreciated, even if negative.
Until tomorrow, always a notional concept in this blog, enjoy the game!
Posted by dorbel at 00:41

"I quite like this close focus on a single position, rather than looking at three or four at once."

However, I do like it when several positions on a related theme are presented at the same time as well, as this reinforces the learning process and I find it beneficial.

If you do 3 or 4 positions on a related theme, I suggest that perhaps each position be made a separate post (and by all means post them on the same day). Its much easier for me to follow it that way and work through the problems.

Maybe position 1 has an equity of 1 after playing on because it is a cash next turn, no matter what the sequence is?!