Thanks to those who took the trouble to comment, yah boo sucks to all those that didn't. If you are afraid to offer an opinion because it might be wrong and you think that you would look stupid, forget it! An opinion, with some reasoning, even when entirely wrong, is something that we can learn from. On YouTube there is a clip where Michy, Falafel and Bob Wachtel (They don't get much stronger than this) are discussing a position. All of them get it wrong (!!) but it is still fascinating to listen to them. http://www.youtube.com/watch?v=W1T6oUc36XA&feature=feedwll
Join in, don't be scared.

It's the Crawford Game and Blue leads 12-1, so no cube, Blue can't win a gammon, but White can and benefits from it quite a bit because she gets to 10 points away from winning the match, potentially two gammons and a plain game. If she only wins a single this time, she'll need three gammons.
Here's Number One again. 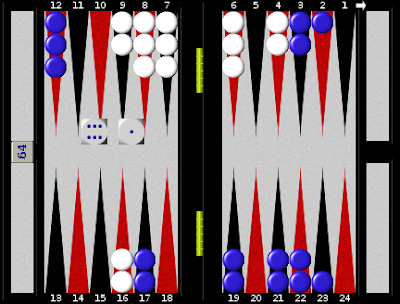 White could delay with 8/7/1 but this turn probably represents her best chance of uniting her stragglers with the rest of her forces. Blue can usually play for two or three more turns before he has to break the midpoint and will probably strengthen his board in the process. If he has to hit now, he still has a lot to do. It's our old friend "Pay now or pay later" and Blue's blot inboard and empty 5pt says pay now. It isn't very easy to jump the big gap between White's stragglers and the Blue midpoint, so she probably will have to do it in two rolls in any case. 16/9 is the play. I could also have just said "What Moonshadow said" as he covered all the bases effectively!

In Position 2, Blue is on roll. 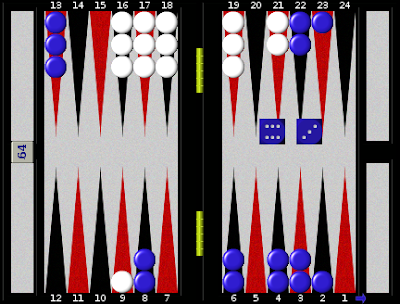 I expect anybody might make the “obvious” play 0f 8/5, 8/2, but clearly best is 23/14(!). What does this achieve? The main point is to free a checker that isn’t doing anything useful. It isn’t making life difficult for White on the 23pt, in fact it is more of a target than anything. If Blue can get this checker into the game, he stands a reasonable chance of building and preserving a board that can win the game if he hits a shot. It has several other things in its favour too. It generates a double shot after 4-4, 3-1, 2-2, 2-1 and 1-1 on White’s next turn. It prevents White from making his 5pt next turn with 3-2 and 4-1, as he will have to hit. It creates the possibility that White will make a large error and choose to make the 5pt instead of hitting. It also creates an awkward 6-5, as White will have to hit and slot a point, thus leaving direct shots. All of this adds up to pressure. Even when hit, Blue will hardly be worse off than he is now and will have gained 11 pips of timing, more if he dances! 13/7, 8/5 is if anything worse than 8/5, 8/2 as it fails to make a four point board.

This liberation of the odd checker from the back is the theme of this quiz and we see it again in Position 3. 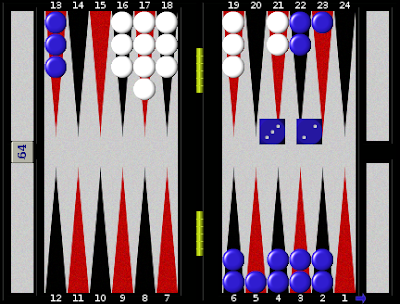 Blue should avoid the obvious trap of making the 20pt, as he will generate a lot more shots by staying back now that White is ready for the bearin. However he does need to play 23/20 with the 3, ready to escape if White doesn’t make the point. As on the previous turn, Blue loses little by being hit, gains timing if he is and increases his chance of freeing a valuable checker if he isn’t. 13/11, 13/10 is a close alternate, a small mistake, but making the 20pt would be a blunder. 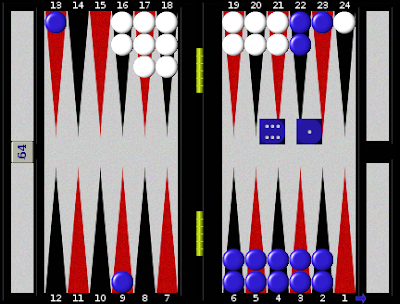 The essential part of this play is 23/22. Failing to pick up the 23pt blot loses double the number of gammons. All the plays have White winning 82% of the games here, but 23/22 keeps the gammons down to 6, all the other plays lose 12. These extra gammons come about in two ways. The first is when White points on the blot and Blue dances for a while. The second is when Blue is forced later to play a 6 from the 22pt and gets attacked and closed out.

Sensing when a blot behind the anchor is an asset and when it has become a liability is a key skill, because it comes up so often. There is no short cut, you need to think in concrete numbers. In Position 4, the only roll I can see that generates a shot for Blue is 6-5 and even that is a very mixed blessing because White will just point on the deuce point. Then Blue might dance, useless, or enter on the 22pt, reasonable but he could have moved there anyway, or 11/36 hit. Even the hit is of very questionable value as Blue will still have three checkers behind a 6 prime and most of the time White will just dance until Blue crashes.

Well, I learned a lot from close study of these positions and if you did too, that's a bonus.

I'll be back tomorrow(ish) with some more nice positions from which we can draw a lesson. Until then, enjoy the game!