The commonly held view in backgammon is that the focus should be on checker play, because typically 75-80% of our errors occur in that area. My somewhat maverick view is that in fact concentrating on cube play and getting that right is more important. Why is this? For many years I'd observed that there were players in the chouettes and tournaments who made a lot of obvious errors in checker play, but survived and even prospered in the chouettes and did surprisingly well in the tournaments too. I could also see that there were very skilful players, mostly from the Middle East and the shores of the Mediterranean, who didn't get the results that their excellent checker play merited. It became obvious (to me) that the factor uniting these two groups was their cube play. The first group compensated for their checker weaknesses with a very accurate appreciation of the equity of positions, thus saving them from bad takes and enabling them to make efficient doubles. The second group, who had often been playing from childhood in a home where their father and their uncles took pride in skilful and subtle play, floundered badly with the cube, because it is to this day almost unknown in their home countries.
However, given that our bot analysis demonstrates clearly that most of our error rate is accumulated with the checkers, why does the cube matter so much? It works like this. Each match that we play is of course broken down into individual games. If the "luck" was more or less even in each game, then the most skilful player would win it, but this almost never happens. The usual dice in any individual game give one side or the other such an overwhelming advantage that it can't be overcome by skilful play, even if one side plays world class and the other side plays beginner! The better player's skill is swamped by the dice and the key skill in the great majority of games is to get the cube in the right place and at the right level.
So, does this mean that we need pay no attention to checker play? Not at all. There will occasionally be a game where the dice are even enough for the skill to count, notably the cubeless games as they have to be played to a finish and are thus longer than the others. There is also a great deal of skill in suiting your play to the position of the cube, notably in not overplaying a position and taking a bigger risk than needed in order to ship an efficient cube next turn.
Most of all though, checker play is important because the superior player will get the "luck" in a game more often than not. I had thought this for a long time and spent many hours trying to find the flaw in the argument, until finally a long thread on Fibsboard, illuminated by the contributions of boomslang, pck and Zorba among others demonstrated that this clearly was so and why.
http://www.fibsboard.com/fibsboard-forum-matches/how-do-%27luck%27-calculations-work/?all
Read it and marvel.

So now, when looking at the games of an individual, I concentrate first of all on their cube action and here are the positions from the last post and what I wrote about them at the time. 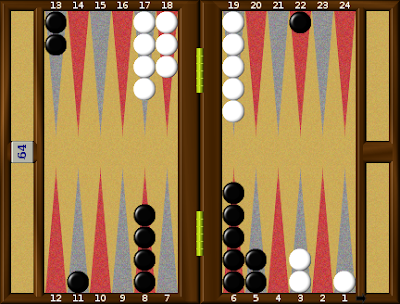 Black on roll, first game of a 5 point match.
He doubled and I commented, "You doubled this and I can sort of see why. You lead in the race, your position is clearly better (one back against three, stronger board, outfield control) and you do have some threats but I think it is very important to see whether those threats lose your market and by how much. Over the board I would say, “Well if I can jump out and she does nothing special, it might be a pass, maybe not, but I’m not even a favourite to escape. I like to wait and see.” Basically, White is anchored, all her checkers are in play and the situation isn’t very volatile, so trivially easy take. Everybody takes this. The next sequence was Black 4-1, 11/7, 8/7, pretty good and White rolled 5-1, correctly played 24/23, 8/3*, but pretty bad. Now it’s a very strong double, probably a close pass, ideal. You get a point with a pass and probably about 1.07 points with a take. Note though that the point is concrete, on the sheet and you get it without making another play. The 1.07 points is theoretical and you have to play well to get it against an opponent who owns the cube. I would be pleased to get a pass here and wouldn’t mind if I got a take, nice position to be in.

There are two other things that you need to note here. The game has a long way to go if played to a finish, so the cube is completely live, i.e. at its most valuable. Also, you can take a little deeper than usual in the first game of a five pointer, because the redouble is unusually powerful. There are several reasons for this which I am happy to write about if anybody wants to see that, but for now note that the player owning a 2 cube at the start of a five pointer can wreak havoc with an aggressive redouble". 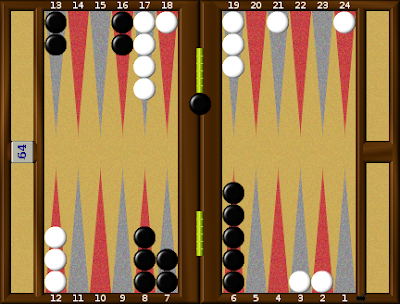 Black leads 2-0 and is on the bar. He doubled this and this is what I wrote for him.

"A very early double, a blunder and a very easy take for White. If it was White that led 2-0, this is a double all right, but for the leader it isn't. Why? Once you lead in a short match (or towards the end of a long one), then doubling positions where the threat is largely to win a gammon is counter productive. In this case, if you win a doubled gammon, then one of the extra points for the gammon is wasted. Not only that, but if White redoubles, you don't get anything for a gammon at all and in addition, you can only use use three of the four points on the cube! Lastly, this position is extremely volatile and hard to predict, the opposite of what you need for a double when leading. You want a fairly static position close to White's take point, a holding game or a race ideally, one where the recube isn't going to be scary." 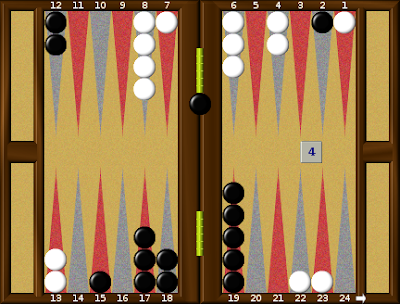 Black leads 2-0 to 5 and is on the bar. White is on roll and redoubles.

"Clear redouble for White, killing the cube, nullifying Black's gammons and activating White's gammons as match winners. A huge pass for Black, for all the reasons above. White has a better position and a race lead and attacking threats. For money, easy take for Black with the cube very much alive and fair gammon chances himself, here, get out now and play at 2-2. "

The volume that you need to explain all this is a short volume called "How To Play Tournament Backgammon", by Kit Woolsey and published by Gammon Press. Not a modern volume, but it clearly explains the hows, whys and wherefores of adapting your play to match scores. Essential reading.

That's enough for today. Until the next dorbel daily, enjoy the game!

I'm a little surprised that most of the error rate, as opposed to the number of errors, is accumulated with the checkers. Certainly 75-80% of the errors - at least in the intermediate/advanced (sub-expert) range - seem to be checker plays, but I don't see catastrophic errors in the same way as I do with the cube. It no longer surprises me to see intermediates scoop up a -.500, or even -.750 cube without hesitation... and the best thing I ever did for my game was to work on my bad takes and make them into a rarity. (Now for the bad drops!)

XGRoller++ gives for Redouble even a TG/P by .049. Monster redouble. And beside checkerplay and cube action there is a third space, very difficult to learn (how do you teach this?!), the estimation of gammon rates. Many of my cube errors depend on false gammon rates.