A reader sent me this position from a recent match and asked, "Why does the bot want me to break the bar point here? It thinks I should have broken it on the two preceding rolls as well. Surely I need to keep the last two White checkers contained? 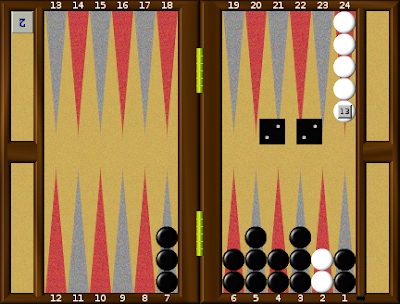 In this position it is correct to play 7/3, 7/5(2), getting ready to start the bearoff next turn and allowing White to exit with fives. This is good enough to make Black a 93% favourite in the game and about 7 of those will be match winning gammons. It is often right to keep the prime if White still has a good board and you want to force her to break it with fives, but with this roll you wouldn't do that anyway. You would have to play 7/1, 5/3 leaving you horribly stripped and vulnerable to leaving a shot, perhaps even a double shot.
A third alternative that becomes viable when White's board is fatally crashed, down to 3pts or fewer, is the trap play. Here that would be 7/1, 7/5, deliberately leaving a blot that White will be forced to hit with a five. The idea is that if White does hit, you can recirculate the hit checker, attacking the blot on the 2pt and hoping to close out two checkers for a gammon. It's not right with this roll, because Black's spares are poorly placed, but with a roll of 3-1 for example, it's well worth a try. 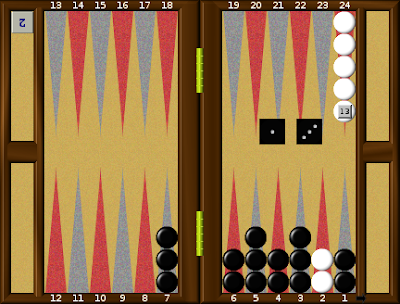 After 7/6, 7/4 you can see that if hit, Black will have ones, twos, threes and fours to hit back from the bar, a total of 31 shots. If White can't hit or has to leave with a six, then Black's checkers are ideally placed for an attack or to start the bearoff as the dice dictate. This play will lose at worst 1 game compared to the safe play, but will win about 8 extra gammons, which is good action.
Perhaps this reader was deceived by the pipcount, which shows White leading 59-67 before the roll. This is very misleading, because if it comes to a race, White will waste tons of pips bearing all those checkers off the ace point. A more accurate White pipcount allowing for that wastage would be about 100. How did I do that? You need to use the Effective Pip Count, developed by the late Walter Trice for just this sort of position. I could explain it to you, but if youare interested (and you should be because it is very, very useful) then go to http://www.bkgm.com/articles/EffectivePipCount/ and read it for yourself. Then read it again, however many times it takes to settle into your brain. It's priceless.

Got any positions you want to ask about? I'm easy enough to find on Fibs or GridGammon, or if you like use the comment form at the end of each post and include a Gnu ID. I'll be happy to give you my opinion.
Enjoy the Game!