It always pays to look at your own blunders. Sometimes when I'm short of other stuff to post I even show them to you, but only when they aren't too embarassing.
I played a 7 pointer with eberlein on fibs today, a very strong player. I kept it down to two blunders which I was pretty happy with, but first let's look at some cube action (and inaction) from game two. 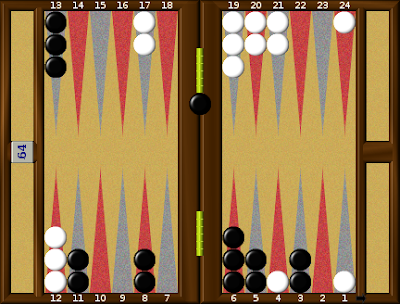 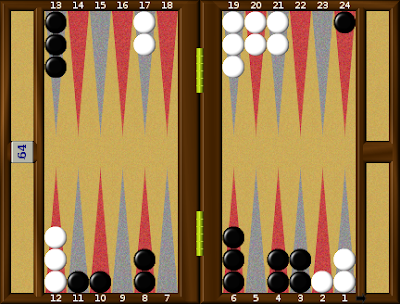 I think we all know to double this one, as three men back against one is often a double anyway, so I doubled and White correctly took. She still has the best board, she's anchored, straightforward take. Then I threw 3-1 and how would you play that?
In the end I settled for making the 5pt and anything else is a blunder. Basically, it's going to be a long difficult game, cubeless for a long while yet, so I need the board in order to compete! 13/10, 11/10 wouldn't frighten a child.

Later still we got down to this. White leads 4-0 to 7 remember and here she doubled. 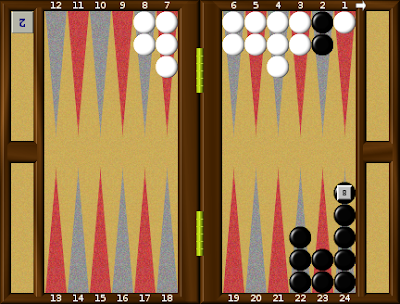 It's important to know your Match Equity Table here. Is White's double correct? Should Black take if she does double? Let's leave the answers to these and other burning questions until tomorrow!
Until then, enjoy the game!
Posted by dorbel at 04:25

Black can take as deep as 10% (remembering to immediately recube for the match) which I'm pretty sure he can scrape together - hitting on White's immediate 65 and 64, hitting later if White bears in awkwardly, or boxes when the 8-point opens.

Should White double? No. Doubling nullifies her gammon wins for the match (when Black has to leap a man out and is immediately attacked). So on her best sequences - plain roll, clear the 8, Black rolls a 6 - she's regretting turning the cube; on the rest Black is still clinging on for a take. So there's no "ordinary" market losers - they all punt White beyond the too-good point.

well I'm always here but never comment - because I'm usually pretty sure that I'm wrong - just like now!
my thought was that the double was wrong as it's too good to double with a gammon winning the match and a win getting you to crawford anyway and making you practically unassailable. Then I thought black should pass anyway as there aren't many wins from here without immediate big doubles.
My first serious look at an equity table did make me think that time would be better spent in the bar though ... so the take would be on and with an immediate return double giving you a chance to win the match ... with that reasoning, white shouldn't double. So then I put the game into gnu ... and it would be a spoiler to say what happened.

(Posted without reading other comments)

The rule of thumb for acepoint games is that they are about 20% wins and 20% gammon losses. Since duece point games are slightly better (although not by much) this looks like a take.

As for the double decision, cubing takes those ~20% gammons off the table. I'd just roll and try to get to 6-0 Crawford or win a gammon. AtS, Black is like a wounded cornered animal and should be treated with caution. That said, with a takepoint of 18% and GWC in the region of 20% it's arguably a double. I'd still hold.

This blows my calculations out of the water. Revised takepoint calculation:

Of course, this doesn't change my answer, it just makes the decisions easier. Doubling or passing are probably both large blunders.

As it's my frist post I'd like to introduce myself. I am young (in Age and Backgammon experience) player from Switzerland. I stumbled over this blog a couple of weeks ago as I try to get a little bit better in backgammon.

I usually play against my dad, girlfriend or sometimes other friends. Recently I started to play online but the competition there seems very hard, which motivated me to get better.

I wonder about the post of ah_clem how do you calculate the MWC to go on with a calculation when it's a take and win?

For me it would have been an instant drop, but I guess that's why I am reading this blog now.

Hello Ebi and welcome to the blog and to backgammon! The best free site that I know is Fibs.com, so I hope that we will see you there. The competition will seem tough at first, but motivation is the key to improvement.
If you want to learn about Match Equity Tables and how to apply them to your game, I suggest that you try
http://www.bkgm.com/articles/mpd.html
where the excellent Tom Keith will take you through all that you need to know.
If you find this hard to follow, don't worry, focus on simpler techniques at first and come back to the tough stuff later. 95% of players never do a match equity calculation and still have a lot of fun and win a lot of matches just by instinct.
I also recommend a subscription to http://www.gammonvillage.com/backgammon/magazine/ , which has an enormous archive of useful stuff, including all the original articles by Walter Trice which were eventually collected in the superlative book "Backgammon Boot Camp". Good luck, keep reading and above all, enjoy the game!

Thank you very much for the links. I will definitely have a read on those. At the moment I started to study 501 Essential Backgammon Problems by Bill Robertie (with bot corrections) which already helps me a lot to get my head into the right thinking process for checker play.

While playing online I realized that cube play is very important as well (we usually played without cube but introduced it now). So that's why I started to read up on a topic as well. It seems that an important thing is to be able to quickly count pips because my cube decisions are mostly based on how the board looks right now (which is often missleading).

I already played a few matches on fibs, but it's not always easy to get the good opponents, because a lot of the mobile users will just leave at some point.

So many thanks for the good advice and I hope to be discussing in the comments in the future as well :)

Welcome to FIBS and the broader backgammon community, ebi.

You are correct that cube action is quite important on FIBS, since it's mostly match play. Anytime you're playing a match longer than a one-pointer good cube handling is key. The first thing I'd reccommend is familiarize yourself with the mandatory double, the free drop, and the 2-away 2-away action. Just knowing what to do in these situations should improve you cube handling, and the ideas are pretty easy.

As for finding opponents on fibs, many of us won't play phone users for exactly the reason you cite. Many of us also won't play users with more than a few saved matches, and whenever you get dropped by a phone user you accrue a saved match. So, the simple solution is simply not to play phone users. You'll also find that it's much easier to find opponents once you've gained 1000 or so experience points. If you play the bots, you can gain those experience points without the fear of being dropped.

well, decoding my ramblings I think I decided on : no double,take which appears to be correct.

as I said above, I played the position in gnu where I forced white to double to see what could happen ... I accepted, white left a blot, I doubled and was accepted, i hit with a 55 and then threw a 66 and from there won the game ... yay! Then I went happily to the pub.