Three On The Ace 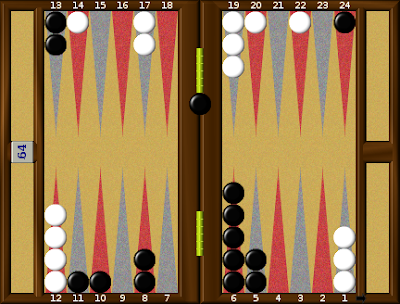 The least useful place to have a spare is on your anchor and as the 24pt is the weakest anchor, it follows that having three checkers on it is very bad. It's practically an invitation to the cube, so should Black, who is on the bar double this? If Black doubles, should White take? It's the first game of a five point match and Black did double this and White (dorbel) passed. Give it some thought and then read on.

If you thought that Black is actually too good to double then I would say that that is a reasonable view, given that White already has three back and three more blots are waiting to be hoovered up. OTB I thought that might just be the case and so passed very quickly. To my surprise, this is a correct take. What is happening here? To find that out, you have to revert to the only technique that we had before bots, the hand rollout. In the old days, this involved hours, sometimes days, of playing the position over and over again, ideally with a friend, often alone! There were some techniques for reducing the dice variation, notably changing the opening roll each time, but the number of games that you could complete and the inevitable playing errors made the results of little value in determining the most likely outcome. However, it did give you some practice and a little confidence when you met something like it in the future. We can still do this now, but using the "Play from here" feature on the bot. It will set the pieces up, play one side and tell you afterwards how you played too, allowing you to improve your play in the position as you go on. You can swap sides.
I did this with this position and discovered several things. The first is that because of his awkward position, Black's play is far from straightforward, so in order to achieve anything close to the bot cubeful equity of around 0.9 he will have to play brilliantly. The second is that the position White fears, where she finds herself in an ace point game with several checkers behind a prime just doesn't happen! When she isn't hit, her blots become slots and builders. When she has one or two checkers sent back, she still has lots of play because Black only has a two point board and can't develop it quickly because of his awkward position. All this is not to say that Black is not hot in this game, he will win about 62% from here including 33 gammons, but White does have a take and must seize the chance to play a long difficult game owning the cube. This is particularly true at this score, where the recube can come earlier than usual.

As so often happens, I quickly saw something very like it again. 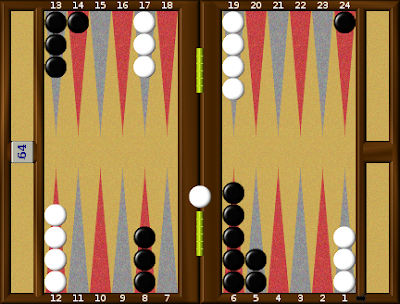 Also in the first game of a five pointer, but as you can see with several features that improve Black's game. He isn't on the bar and White is, one of his back men has escaped and his forward checkers, although still stacked, are a bit better placed for an attack. I would have passed this, correctly, but Black decided to play on for the gammon. It's quite a reasonable view to take, as he can usually cash later if he wants to, but double/pass is correct. I always repeat a little mantra here, culled from early reading. I think it's Robertie. "The side playing on for an undoubled gammon against an ace point game is either making a mistake or has already made one". This is a very valuable piece of information, although there are scores where playing on is clearly correct, usually when an undoubled gammon wins the game for you.
At the risk of repeating myself to my regular readers (Sid and Doris Bonkers of Neasden), my philosophy is to only play on for the gammon when I am certain that it is correct. When it's a close decision but playing on is correct, this sometimes costs me a small piece of theoretical equity, but it does put a real point onto the scoresheet without having to play to get it. Also, the icing on the cake, sometimes they take!

So, the next time you see a position and you ask yourself, "What is going on here?", play it. You'll learn a lot more from it than you will reading books, or indeed this column.
Until the next time, enjoy the game!

Mochizuki Masayuki v. Matvey Natanzon, a 13pt IIBGF Match.
Mochizuki Masayuki v. Carlo Melzi, a 13pt IIBGF Match.
The XG files for these matches, annotated by me and approved by Mochy are now available, $10 each. Gnu and Snowie users can have a Gnu file with the commentary on a separate word doc. Both matches show brilliant play at the highest level and are very instructive for students at all levels.
PayPal please and enquiries to dorbel(at)gmail(dot)com.
Posted by dorbel at 01:36