Some questions seem to pop up time and again, but we never quite know the answer. Here's one a student asked.
"I have a five point board from the 6pt to the 2pt, my opponent is on the bar. Should I slot the bar to try and make it, thus giving him the joker 6-1?" As you may have guessed, the answer is, "It all depends." Depends on what?
Take a look at this series of positions. It's post Crawford, White has the cube and is on the bar. Black rolls a 6-3. 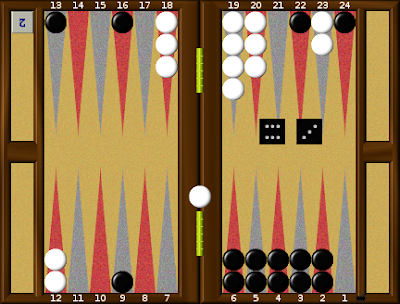 Slot the bar? You have three questions that need to be answered. How close is the race? How close are you to winning the game? How useful is this number if you don't slot?
So, race. Black still trails 124-115. This argues for slotting the bar. You need to contain White if she enters, to stop her from jumping out into the race and/or hitting a fly shot in the outfield.
How close are you to winning the game? Not very, there's still a lot to be done bringing those back checkers round and making the bar will be a big help. This argues for slotting now.
How useful is the number if you don't slot? Not bad, it escapes a back man, but they shouldn't have too much trouble getting away later, so I suppose the answer here is neutral.
So, two votes for a slot and one don't know. Slotting is correct and 24/21, 22/16 or 24/21, 16/10 (preparing to make the bar naturally) are small errors. 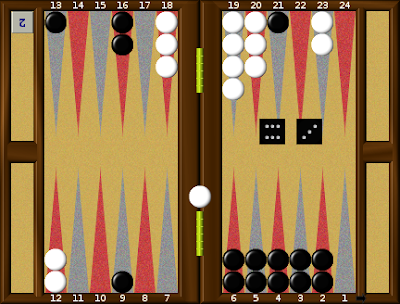 Now the race is tied before the roll, 115-115, so it's less important than before to contain White if she enters, but still worth doing. If White enters next turn, she'll have good racing chances. Black still has a bit of running round to do as well and locking up the six prime will make it much less stressful. As to being useful elsewhere, Black can play 21/15, 16/13. This continues the escape and usefully now gives 6-6 to complete the close-out, as well as 3-3 and 6-2 to make the bar naturally. However, on balance it looks like we should still slot and that is the right play. 16/7 is worth the risk, although it's closer than before and the alternate plays are now only mistakes costing just under 0.03ppg.

Note with the above two positions, we are offering a lot of fly shots by slotting. It's not only 6-1. If it's correct to slot with this amount of risk, obviously with less risk it would be even more atrractive, in fact it's harder to imagine more risk than having five blots spread out around the board, although paradoxically it is these blots that are the reason why we need the bar so much! We'll breathe much more easily with a six prime.

Black doesn't slot the bar and after another White dance Black rolls 5-3. 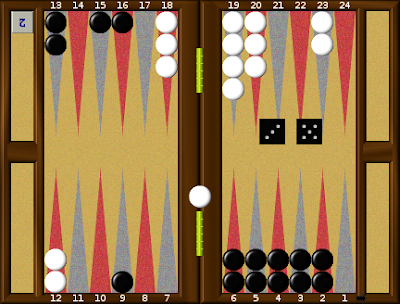 Black has improved, White has done nothing. Black can still slot with 15/7, but several things have changed. He's gained a lot in the race, making it less necessary than before to complete the prime. He's much closer to winning, as he has escaped everything and reduced the fly shots. He can also play this quite usefully in other ways, either by cutting the fly shots down to zero (16/13, 15/10) or perhaps better 16/11, 9/6, preparing to hit on the ace if White enters. The numbers to make the bar naturally have also gone up. After 16/11, 9/6, Black has 6-6 and 5-5 to complete the closeout, as well as 4-4, 3-3 and 6-4 to make the bar naturally.
Where does that leave us? Now slotting the bar is probably minutely wrong, certainly not a bad play but according to the rollout, wrong by 1/100th of a point!

What we have seen here is a nice natural progression from clearly right to slot the bar up to maybe/maybe not. If White dances again, we should see a position where slotting the bar is clearly wrong. Black played 16/13, 15/10, the joker control play and White danced again, whereupon Black rolled 2-1. 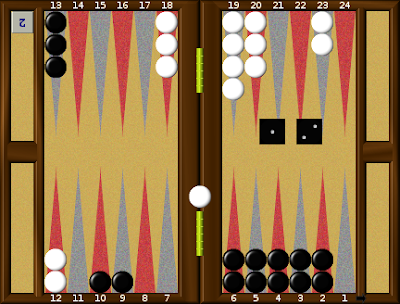 Tomorrow I'll continue with this theme, when we look at whether it is right to slot the bar when the opponent is anchored on the ace and has a man on the bar as well.
Until then, enjoy the game!

Mochizuki Masayuki v. Matvey Natanzon, a 13pt IIBGF Match.
Better known as Mochy and Falafel, these two giants played brilliantly in this 10 game match. It is now available as an XG file, analysed and annotated by me and with the annotation approved and extended by both players.
It costs just $10 and is sure to be of interest to keen students at all levels. For those of you without XG, it is available as a .mat file for Gnu or Snowie at the same price, with the same commentary in a separate document. Orders to dorbel (at) gmail (dot) com, payment by PayPal please.
If preferred, you can pay 8 euros, or for UK readers 7 pounds.

This was one of the most helpful discussion/illustrations about real life play that I have seen.