Well done to the panel of three bold enough to give us their thoughts on the positions in the last post. The question as to when it is right to slot your own bar is often difficult and I find that it is much influenced by recent events. If I analyse a match where slotting the bar is right and I have missed it, I'm on the lookout for it in the next match and then slot when I shouldn't! 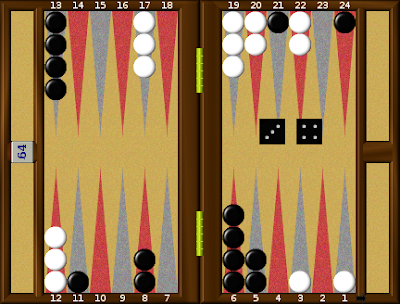 This was our first position, but it came in the next match after I had seen positions two and three, so I was unduly influenced in favour of boldly slotting the bar and leaving 25 shots. 13/9, only 17 shots is a lot better. 6/2 only leaves 16 shots but that checker isn't very useful. Note that the checker on the 9pt is either a slot for that point or a builder, very useful. 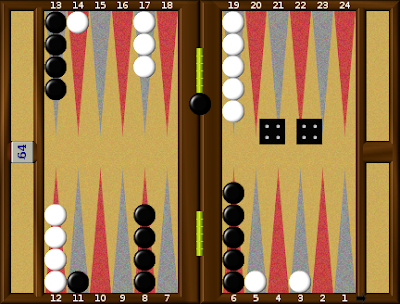 Position Two gave us three 4s to play after entering. 8/4(2) is pretty clear and the last 4 is 11/7, giving a double shot, but it's a good point to fight for and it does duplicate 4s and 2s on the other side. It does leave 21 shots though and so I went for the miserable 6/2 which only leaves 17. This dumping play is often wrong, but right just often enough to make it an attractive play when we have been hit a lot in the recent past! Again note the bar point's dual slot/builder function. 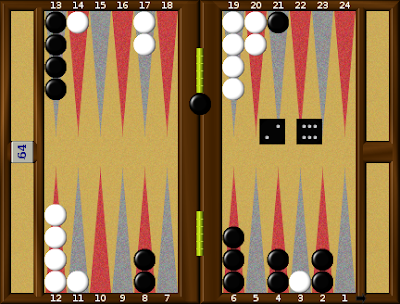 Position Three again had Black to enter from the bar and seeing that Black was in the lead, I decided to race it, bar/23, 21/15. This is actually much the hardest of the three positions, so you won't be surprised to hear that I got this one wrong too. 13/7 is easily the best play, unstacking the midpoint and slotting a very valuable point. It is counter-intuitive to risk another man back when you lead in the race, but this bold play has several things going for it. Again, it is a dual slot/builder whereas the 15 pt is neither. It unstacks the midpoint and in doing so applies some pressure on White to tidy up her three blots. Handily it duplicates fours as well.

Not perhaps the world's most exciting positions, but our panel only scored 6/9 so not so easy either. The lesson is to clear your mind of past history, the last match, the last game, even the last move, because past short term experience is a poor guide. A clear mind is a better environment to find the right answer than a cluttered roomful of unwanted baggage.

I've got a student match to look at now and no doubt that will throw up something interesting for us to look at. It's a rare match that doesn't. Until later then, enjoy the game!
Posted by dorbel at 01:16

I'm late on these, but thanks for for sharing 3 positions. I love quizzes with normal moves/positions, as you say this is much better than looking for the most exciting quiz factor move.
Got #1 and #3 right, in #2 i'd also moved 6/2.