I said in the last post that I would show you some more slotting the bar positions, but the sequence that I had in mind turned out to be less interesting than I thought and covered much of the same ground, so here's an interesting little late game sequence that caught out a strong player with the Black checkers. See if you can do better, not sure I would have done!

This position that comes up a lot, so worth knowing what to do with cube and checkers. It's 3-away, 3-away, cube centred, Black on roll to play 2-1, but first, should he have cubed before this roll? 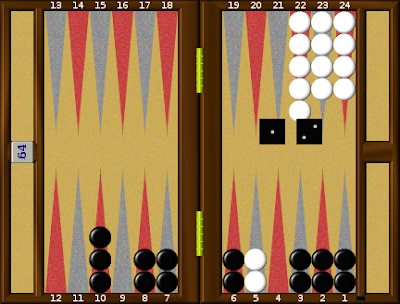 I don't think many people would cube this. White leads 67-84 in the race and although that count is distorted by all those checkers on the low points, it is a lead. Nevertheless, Black is a 2/1 favourite in this position and on roll, wins 66% of the games! At this score, that's very close to a cube and turning it now would only be a small mistake. Note that the score makes a difference, as you can cube a bit earlier tied 3-away. There is one caveat though. If you want to double, you have to know how to play it, or you can give away a lot of equity here. White's play will be trivially easy, often forced, whereas Black can mess this up. Really? Isn't this simple for Black?
Let me show you, but before we go on, write down the three best plays of 2-1 for Black and put them in order.
Done that? Most people here play 10/7. Aware that it's a problem, some people will say, "That's too obvious" and play 8/7, 8/6, creating two spares. I bet not many will spot the imaginative trap play 7/4, but it's clearly right and right by a lot. Playing 10/7 gives away almost 1/10th of a point! 8/7, 8/6 is even worse.
So, why leave a shot? It's because Black's winning and gammon chances go up when he can force White to leave the anchor. If White has to hit on the way, then Black can just recirculate with good chances of picking up both checkers. If White can't or won't hit, Black has lost nothing and has slotted a valuable point.
Well, in the match Black played the stolid 7/4 and White played the forced 4-3, 20/13, which leaves this next position with Black on roll. Should he cube? 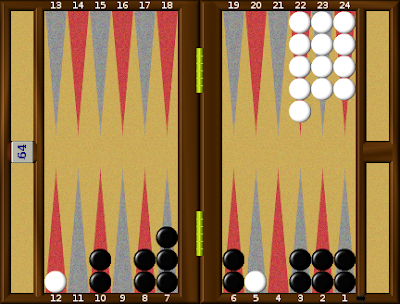 If he was close to a cube last time, Black must have a cube now, even though he has fallen behind in the race. This is because he now has attacking chances to hit and/or point on White's straggler. These lead to market loss if White can't respond, which means volatility which cries out for a cube turn. Sadly, Black didn't cube and rolled 6-4. 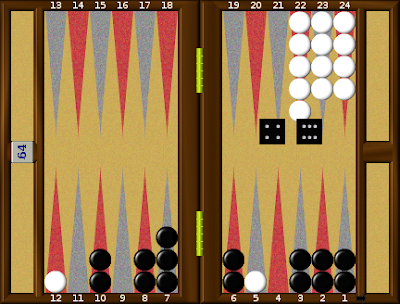 10/6, 10/4 right? Well that's what he played, but it's a blunder. The play is 8/4, 7/1! Why? partly to keep fives blocked, but mostly to force White to hit with her threes, recirculating a Black checker to try and pick up White's runners as they come around. After the match play, White stepped out and won with the cube.

Just because it looks simple doesn't mean that it is simple. Remember too that you have to look at all the checkers on the board. If the race was closer and White had a better board, as she would, then the right plays change a lot. A three point board or less is essential for trap plays. However, if you find yourself in Black's position, as you will from time to time, don't miss your market with the cube. The defender is very vulnerable when she has to leave that anchor.

Great problems! I'm not sure I would have seen the trap plays OTB.

However, I don't understand your comment on the third position that the point of 8/4 7/1 is to "force White to hit with her threes." That makes it sound like White would prefer not to hit if she rolls a 3. For example, after 8/4 7/1, suppose White rolls 43. Will she decline to hit by playing 20/13 rather than 20/17*/13? That would surprise me. Given that White rolls a 3, I would think that she would be delighted to hit as well as escape. If 8/4 7/1 is better than 8/4 8/2, I would guess it's because 8/4 7/1 gives Black more builders for the points he wants, and that the benefit of doing so outweighs the liability of giving White 3's to hit.

You are absolutely accurate Timothy and I was not. I could edit the post, but I'll let it stand as an example of sloppy thinking that can serve as a dreadful warning to us all.
It's good to know that somebody is reading this stuff with a critical eye.