The Famous Five Find The Answers.

The "Famous Five" were the heroes of a series of British children's books written by Enid Blyton, although I doubt if they are much read today. On their holidays the intrepid and ageless quintet invariably encountered a criminal gang engaged in nefarious nocturnal pursuits and defeated them with skill and derring-do. What Julian, Dick, Ann, George and Timmy the dog would have made of our Croatian Quiz is anybody's guess, but thanks to the Famous Five readers who tackled them on behalf of everybody else.
Before we take another look and reveal the answers can I say that these are really tough problems that might well have beaten anybody, because they are not easily solveable without a lot of thought. Each is in one way or another unusual and not responsive to the "usually I do this" method" that gets us through most situations.
Here's Position One again. 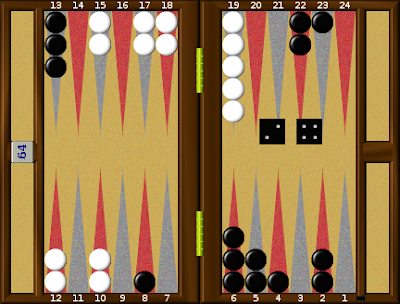 White is "stripped and stacked", a hugely inflexible position to be in. If she can't throw a life-saving double there is going to be a blot somewhere that Black, trailing by 8 pips after the roll, will want to hit. To take advantage of that he needs to cover his blot and over the board I would have tried 13/9, 6/4. This got one vote from the panel and is the third best play. It does beat 22/16 which got two votes, but that play fails on two counts. It doesn't make the four point board and it runs into a race where Black trails. It is a blot that has no useful function when it isn't hit; a blot on the landscape one might say. Another panellist tried 23/21, 13/9, but again, it doesn't make a four point board. It threatens to make it, but that is never as good as actually making it! Lastly we had one vote for 23/21, 8/4, which was also my student's play.
And the right answer is...............22/20, 8/4!
There is an excellent YouTube video where Falafel, Bob Wachtel and Michy discuss a play from Bob's match. Then Bob reveals the right answer as per computer rollout. Falafel says, "Now I know the answer I understand the position", which is very funny and also very wise. So, what is happening here? White's position is the key, because she is really stuck for play with her outfield points all stripped and her 6pt stacked. What XG's play does, after it has crucially made the 4pt board, is to deny White safe landing points. Playing 23/21, 8/4, the second best play although still a large error, allows White to dump checkers onto her 1 and 2pts and even more importantly, denies her the option of playing to the 11pt in relative safety with most twos and fours.

Position Two was a lot easier with only three posible plays. 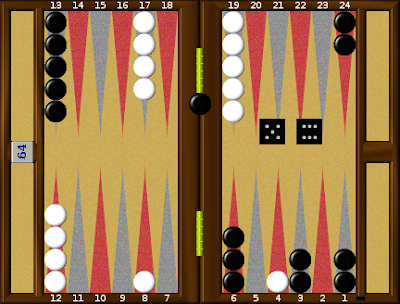 Bar/20/14 got no votes from the panel, another "blot on the landscape", trying to race into a race where Black trails, although not by much. Bar/20, 24/18 got two votes and is the usual answer to this sort of thing, forcing contact while Black has the better board, in the hope of exchanging hits or making a high anchor. Three of our panellists went for bar/20, 13/7 and that is clearly best. It beautifully illustrates two themes that recur constantly. The first is that Black has killed two checkers on the ace point and fatally wounded two more on the 3pt, which is the casualty list when a 5-5 blitz fails. This means that his remaining 11 checkers all have to work extra hard, doing the work that is usually done by 15 men. In bg terms, this means more risk. In addition, Black still has a stack on his midpoint, 5 out of his 11 playable men in one place. I always put a mental flag on a stack that says "Urgent: please unstack me". It's no use saying, "I can't do that now, I've got other problems". Positional flaws like this have to be dealt with immediately. Again, in the immortal words of Falafel (possibly quoting Italo Calvi), "If not now, when?" The handy duplication of threes makes the medicine go down a little more easily.

I bet you can't wait for the other answers, but you will have to wait until tomorrow, as I have a flat to tidy before mrs dorbel comes back from her holidays.

Until tomorrow, enjoy the game!
Posted by dorbel at 01:16

I need practice counting pips! I should have realized just glancing at the first position that Blue is far behind in the pip count. Given that, running off the anchor into the outfield is clearly a blunder. D'oh!