In the next few days I want to look at some facets of the problems facing a player bearing in against an ace point anchor. They aren't trivial and they occur in lots of games, sometimes several times in the same match, so good technique is very important. This is a time for being specially alert and giving yourself a bit more thinking time. There is a strong and very human tendency to quicken up and play faster in this phase of the game and it is caused by several factors. Your opponent's plays tend to be either obvious or forced, so she is playing quickly and a fast opponent almost inevitably has the effect of quickening up your own play. This incidentally is one reason why people have poor results against bots! The end of the game, the winning post if you like is in sight and there is a psychological force that says, "Make a dash for it". Most of all perhaps, the bear-in and the bear-off usually extend over a relatively long period, 10-15 moves is quite common and during that whole period there is the constant threat of an anti-joker, a hit for the defender and the big turnaround of the game that looked won. The strain of this often shows itself in a tendency to play faster in an attempt to get through this tense period more quickly.

It's very difficult to formulate hard and fast rules for this phase of the game. If it was just a matter of bear-in and off as safely as possible, then it would be easy, but there are so many other things to think about that change things. Where is the cube? What's the score? How many gammons can you win and how much risk should you run to look for them. Above all perhaps, what sort of home board does your opponent have and how long can he keep it? This first position is a case in point. Like all the others I show it occurred in live play and White leads 4-2 to 13, holds the cube and has two men on the bar. She is, not to put too fine a point on it, up to her neck in it and the ace point anchor is all that she has. 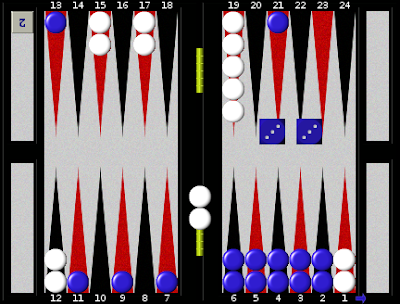 
We'd all like to be Blue here with the cube turned and a hatful of gammons to be had. In round terms, Blue will win about 80% of the games from here and about 60 of those will be gammons, but White still wins one game in five and all of her wins will look "lucky", a point invariably overlooked by the witless morons who loudly moan about the dice when that one in five turnaround comes up. So, what should Blue do with his 3-3? In other circumstances, most obviously if White wasn't on the bar and had a board of some sort, he'd close his bar point and look around for the rest, but it isn't clear that he should make the bar at all here.
Sometimes the six prime is an asset, sometimes not. It can be a weapon that prevents your opponent from liberating the spares on her anchor, forcing her to play the rest of her forces deep nto her own board and, you hope, destroying it. It can also be a liability if you have to clear the bar at some point when she does have a board. So, what is right here? To be honest, I don't think it matters a lot! If you make it, then you'll usually be able to clear it safely later anyway, either because White will still be dancing or because she won't have much of a board. However, I can't seee much gain from making it either, so I would choose something like 21/18, 13/10, 9/6, 7/4. There are several variations on this and almost anything that includes 21/18, 13/10 will do just as well. What we are aiming for is a bear-off position with all 15 checkers home evenly spread over the five points.
Making the bar is a small mistake according to the rollout. The main point is, don't just blindly make the bar. Think!
We'll look at another one in the next post and that will be tomorrow if the good Lord's willin' and the creeks don't rise. Until then, enjoy the game!
Posted by dorbel at 04:06