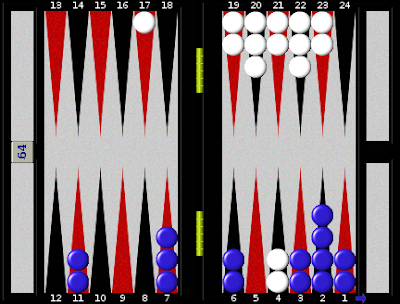 This is the first of the two positions that I put to you in the last post. I originally collected both of these in my folder of "no double, pass" positions, where an over optimistic cube has netted the biggest fish of all, the very wrong drop. Gnu 2-ply marks this as no double, but in fact Blue is in the window and can turn the cube. White's pass is still a very large blunder though and the take is easy. How might one arrive at this conclusion over the board? White's powerful home board is an essential part of the solution. You need this to make your hits count and any weaknesses there are very damaging. The two blue checkers almost dead on the deuce point are also a big plus for White, reducing Blue's options considerably. A quick count of the immediate shots is revealing and I hope that you have already done this. You can't hope to have an accurate opinion without that and if you can't do it quickly in a match, that is because you have never practised it! So, 6-6 and 6-5 leave an immediate direct shot, while 6-4 and 6-3 leave an indirect. A number of others also either leave an indirect or force Blue to bury more checkers and/or give up another point. This will help White in several ways, making a later shot more likely, helping her in the race (buried checkers mean wastage) and reducing the risk for White's last checker when she chooses to run with one or is forced to do so. All these factors mean that White still has a number of rolls where she can turn the game around and given that she can still win the race from here without hitting, is unlikely to be gammoned and can win with the cube if she hits something, it all adds up to a clear take.
As ever, if you don't believe this, rolling the position out by hand and recording the results will illuminate White's ways to win, which add up to around 28% from here. It should also illustrate that Blue's play is a little more difficult than White's,at least for the next two or three rolls.
I'll deal with the second of the two positions tomorrow, so until then, practise, play and above all, enjoy the game!
Posted by dorbel at 05:58