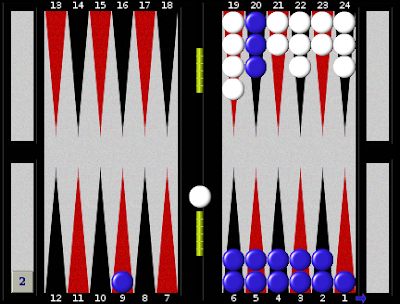 So, back to Cube Action and here is the second position from that article. Blue (dorbel) leads 6-4 to 13 and holds the cube, White is on the bar. White is the strong American player Greg Jukins and this is a match played under the auspices of the IIBGF, a new federation for Internet BG started by Leonardo Jerkovic and I recommend it to you, more details at http://iibgf.weebly.com/index.html .
I redoubled here and after much thought Greg passed, which at the time I thought was right, but Gnu 2-ply marked this as not even a double! The rollout thought differently however and this is exactly on the mark of being just a correct double and a very easy take.
How might we approach this over the board? Let's take a look at the double first. As it stands, Blue has only six numbers that close out and of course they are huge market losers. Blue will actually play on for a gammon after that, at least as long as he can do so in safety. If Blue doesn't double and doesn't cover and White dances again, then Blue will a direct cover number or even two and White will have to pass next turn. That sequence (doesn't cover, White dance) has a probability of 84% x 70% = 58.8% and if you add that to the 16% chance of covering anyway, this looks like a hugely powerful double and as I thought at the time, a big pass. The rollout is quite clear though that this is only a minimal double at best and an easy take, so where can White put together enough equity to take this? Cube ownership is the answer, it's very valuable to White here. The sequence Blue doesn't cover, White hits is 84% x 30% = 25% and after that White, owning the cube, will be in good shape. If Blue dances, White can immediately redouble to 8, killing the cube and Blue's (rare) gammons. If Blue enters, White will have to escape and not be hit before she can consider a redouble. Of course each time that Blue fails to cover, White has the chance to hit and initiate the same sequence and these chances add up to a lot. Note too, that the White builders on her 6pt are very useful, allowing her to play non sixes when she enters and for a turn or two afterwards, while she waits for her six.
So, to sum up, a very volatile position with lots of market losers, but the cube extremely valuable for White in a position that is very easy for her to play. Blue loses his market by a little if he waits and White fans and a lot if he covers. White can take quite easily at this score. Note that when she redoubles to 8, Blue can't use all the points, but White gets nicely to Crawford if she wins.
The best way to understand all this is to play it yourself 50 times or so. I can't recommend this learning method too highly or indeed too often as regular readers will know. Best yet, play it over and over again with a learning buddy, swapping sides and analysing as you go. You'll gain confidence and understanding of a position that two strong players and Gnu got wrong at first sight.

I'll have some more stuff for you tomorrow, so I hope you'll come and take a look. In the meantime, enjoy the game!
Posted by dorbel at 00:35

As the owner of this gigantic error, I thought I'd add my two cents. For me, the key is not really cube ownership, but instead the number of times white hits. This is what I underestimated at the time. 9/36 hits after the first sequence, but then maybe 4 more for the second sequence, 2 more for the third, and 1 for the rest. These really add up. So 16/36 total hits, hopefully that's a reasonable estimate. Since white has a lot of work to do after the hit, we can give him half of those as wins (plus a little since 2/11 of his hits are with the strong 6-1 roll). Also, a significant portion of whites wins are gammons. Take!