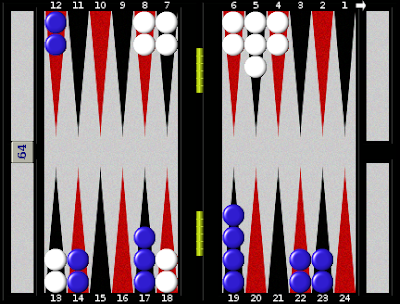 White leads 1-0 to 5, should Blue double?
Technically the answer is no. Rollouts show that Blue will do better if he waits until he clears the midpoint. However, doubling now is only a very small mistake and if you are playing a stronger player, this is one for you to double at this score. If you get lucky and clear the midpoint, you've usually lost your market. There isn't any great skill involved here, so White isn't going to be able to outplay you and she isn't going to be able to redouble you unless she gets a shot, hits it and puts you in the air behind a five prime. Best of all perhaps, doubling now means you can't make a larger mistake and fail to double later!
Bots (and most humans) don't like to double against the bar anchor, but it is often only a small mistake, as here and if you have some spares and this sort of lead, it's often right. 2 points for selecting no double, but 1 point for a double I think. Always a take of course.
In the match I didn't double, rolled 3-3, 13/10(2), 11/8(2) and cashed next turn.

That made the score 1-1 and after a fairly routine opening, we came to this position. What's the correct cube action for both sides here? 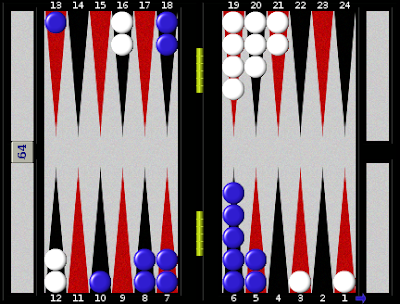 Until tomorrow, enjoy the game!
Posted by dorbel at 08:04

White has the better board, but I like blue's position somewhat better - a four-prime vs a three-prime - so slight edge in position to Blue. Blue is ahead in the race by about 20 pips. And blue has more threats - in particular 12 checkers in the zone against a couple of blots means that there are gammons to be had.

A good recipe for victory in short matches is "get some gammon chances and push the cube". Here, blue has an advantage in position, race and threats so it must be a double. Can white take?

The gammon threats give me serious pause as white, but I see my solid board and think it's wimpy to pass this one. While gammons are lurking, there are lots of opportunities to turn this around and have a nice efficient recube.

as blue i would definitely double. it looks like white could easily get closed out here. as white i would probably be inclined drop the point, hoping to get the early upper hand in the next game and not get too far behind in the match.

i subsequently put it though gnu (thanks for the IDs) and... dorbel will reveal all :)