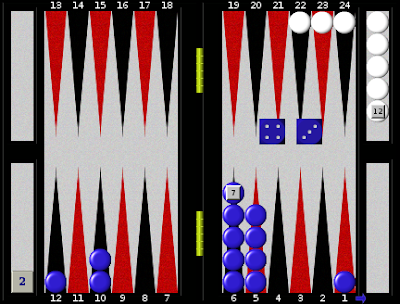 Here's our cliff hanger from the last post and as Ah Clem suggests, leaving a checker on the 12pt will activate 4-4 to save the gammon. 12/8, 10/7 achieves the same thing. This will save the gammon in another 31 games in every 1296, not many I know but looked at another way it increases your gammon saves by 50%! Presented as a problem, it's not hard, but would you have taken the trouble to sort this one out over the board? That's for you to know and us to wonder as they say.

Today I want to look at bear-ins where we can still win the game and we'll take a quick look at the cube in passing as well. All of these are from a live match with me playing Blue. We are only going to scratch the surface of course. It would need a chapter or two to do it justice, but I'll try to cover the main heads. 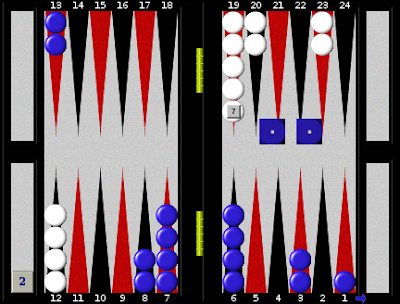 Position ID: xv6ABwAZ7w0GAA
Match ID: UYmkATAAUAAE
Blue leads 10-3 to 13 and before the roll led the race 101 to 108. This is not quite enough for an initial double at this stage, even though Blue will win about 70% of the games from here. I want to look at race doubles in greater detail on another occasion, but the simplest way to look at these (and accurate enough for most purposes) is that a lead of 8% of the leader's pipcount is considered enough for an initial double, 9% for a redouble and that the trailer can take with a 12% deficit. A pip or two less and Blue would be in doubling territory.
Now, how to play this 1-1? If we were just racing to save the gammon then 7/6(4) is the best play, four cross-overs and no wastage. We can do better than that in this situation, but first let's see why 7/6(4) is wrong. When we start the bear-off, we want to avoid two evils, which are gaps and stacks. By bearing in intelligently we can fill the gaps and avoid putting more checkers onto points that are already over-crowded. I actually played 7/5(2) here, but 7/6(2), 7/5 is as good, the extra cross-over making up for stacking the 6pt. This use of an odd one to fill the 5pt is very common, so look out for it. 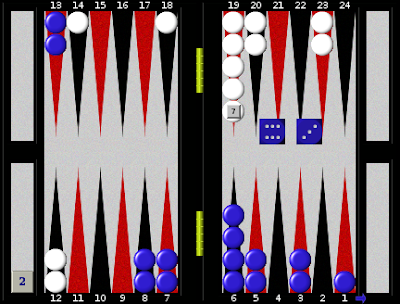 Position ID: xv5CBgCZvQ0GAA
Match ID: UQmvATAAUAAE
I think just about everybody would play 13/7, 13/10 here and you can't fault that, but equally strong is 8/2, 7/4, filling two gaps and coming with the subtle benefit of stopping White clearing her midpoint with a roll that includes a 1! Not all gaps are equally bad, but by far the worst place for a gap is the 4pt, particularly when there are a lot of checkers on the 5 and 6pts. When the 4pt is empty for the bear-off, then not only do you miss with a four, but all the fours have to be played to the 2 and 1pts, which is not a good place to have a lot of checkers. Why? Because unless you throw lots of ones and twos, then these points will eventually have to be cleared with larger numbers and in the process waste pips. This is why generally speaking we avoid bearing in to the lowest points if we can. It's a nuisance to miss with a one or a two of course, but these small numbers can usually be used very effectively to fill a gap or smooth out a stack. 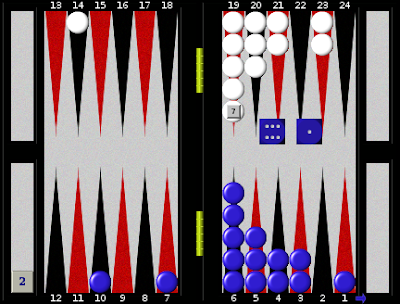 Position ID: ZvcHAQDZ7osAAA
Match ID: UQmnATAAUAAE
10/4, 7/6 is obvious of course and I actually played 10/4, 6/5, but the best play of all may be 10/4, 3/2! Using the 1 to make a cross-over is, as we have already seen not always the most efficient way to use it so 3/2 is quite clever. It means that we won't miss with the first two and although it means that the 3pt is now dangerously thin, we don't need to mind so much because after the first three, we can fill that point with checkers from the obese 6pt! A stacked 6pt and an empty 3pt have a sort of symbiotic relationship that works quite well.
The difference between all of these plays is very small. There are no huge mistakes to be made bearing in with no contact, so just follow the general rules. Try to avoid gaps, with the 4pt being the worst gap, the 1 and 2pts the least damaging. Don't stack too many checkers on a single point if you can help it. The 4pt is the best place for a stack if you have one, the 1 and 2pts the worst.
That's about it really.
In the next post we'll look at bearing in against contact. Here there are some big mistakes to be made, because of course leaving a shot and being hit is usually a disaster. See you then.
Posted by dorbel at 08:58