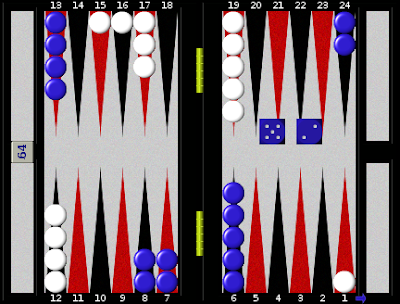 This is a commonplace problem early on. If you are voted for 24/22, 6/1* you are in good company, Gnu 2-ply plays this! However, the rollout makes it second best (by a small margin) and I think that is right. The best play is 24/22, 13/8, bidding to get a high anchor as soon as possible. Indeed, that is what hitting loose is trying to achieve. It's not a serious attack, only a diversion to take away half of White's next roll. However, if you voted for 13/8, 13/11 you need to take a long hard look at your opening strategy. To be sure, that play is trying to make points and extend Blue's little prime, but it will always be playing catch-up with White making points or bringing down builders on the other side of the board. Moreover, Blue will be trying to contain a single checker, which is much like trying to pick up a wet bar of soap. You think that you have it and pff, it's gone!
Players who are not used to splitting dislike it, because they fear being attacked. Well, it's true that you do expose yourself to that danger, but remaining glued to the 24pt is more dangerous still. Think of them as soldiers hiding in a shell hole as the enemy advances. If you stay where you are, you will probably die later, whereas if you try to break out now, there is a chance that you can either find a more defensible position or sometimes even escape entirely!
Here's something along the same lines from a little later in the game. Blue leads 3-1 to 5 and from the bar has a 6-1 to play. 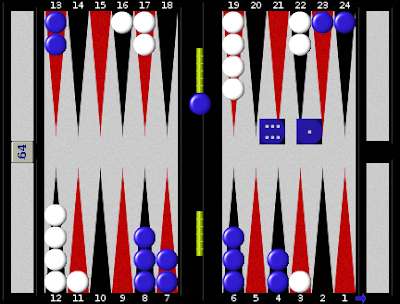 It's pick a 6 time. Let me have your thoughts on why you like your choice and I'll see you tomorrow. Until then, enjoy the game!
Posted by dorbel at 10:20

Blue is way behind in the race - no need to count pips, just look at blue's three checkers back vs White's one. Since Blue is behind, playing behind White's runner is probably incorrect - better to maintain contact with all 15 checkers.

Abandoning the midpoint seems awkward too - it leaves a double-shot while giving up a valuable point. If blue plays 13/7, he'll have to follow that by safetying the other checker on the 13 at which point he has no outfield control to whack white's runner and no way station for his own runners. There are times to abandon the midpoint, but this isn't one of them.

That leaves splitting to White's bar point. Yes, this leaves a triple shot and blue will likely be right back on the bar, but white will probably leave a blot in the process giving blue the chance to hit it, or failing that to make a defensive anchor.