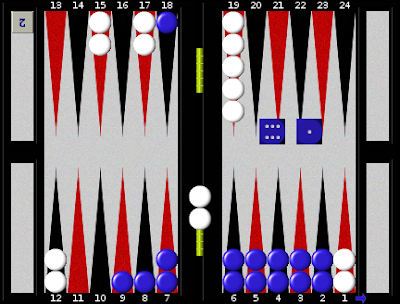 White is leading 4-2, holds the cube and has two checkers on the bar. How would you deal with this 6-1? Of course Blue would have liked a roll that freed his last man, but he has found one of the nine rolls that don't do that, nicely illustrating how difficult it can be. You have a choice of two sixes, 9/3 or 8/2 and 9/3 is clearly the best. Flexibility is a key concept for bearing in and off, giving choices in where you place your men. If you move to the 2pt, the checker dies, whereas moving to the 3pt allows you to play a one from there later if you need to. That gives us a choice of ones, 8/7 or 7/6 and it should come as no surprise to you that 7/6 is best, starting to clear the bar and leaving three checkers on three different points, rather than piling them all onto a point that has to be cleared later anyway! I am sorry to say that Blue did play 8/7, bringing us to the next position.
White has entered one checker and Blue again finds a number that doesn't escape, 3-1 this time. 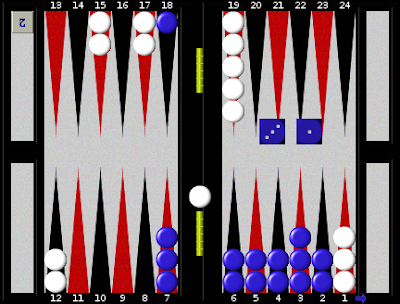 7/4 is forced, so a choice of three aces; 3/2, 4/3 or 7/6. 3/2 buries a checker, 4/3 stacks a checker, both of which we know to be undesirable and 7/6 is the play, not to avoid burying or stacking, but because starting to clear the bar while White is still in the air is desirable in itself. The risk of being hit with 6-1 from the bar and then losing is less than the risk of trying to clear it later, particularly here where 6-1 hits anyway and White has no board. Strong players make this play routinely, weak players jump at the shadow of that immediate 6-1 and prefer to defer the risk until later. 7/6, 7/4 is clearly best, 7/4, 3/2 is a small error, 7/3 is a big error.
You can see here how the value of the six prime has deteriorated and become a liability as the game moves on. If you find yourself in something like this situation, you need to ask yourself this each turn, "Asset or liability?" As Blue made a small mistake in completing the prime in the first place, then the need to dismantle it has grown stronger move by move.
Tomorrow we'll see how the game progresses from the bear-in to the bear-off. Note by the way that Blue (not me for a change!) is quite a strong player, certainly advanced level, so if he is making these mistakes, so are a lot of other people. Enjoy the game!
Posted by dorbel at 00:28