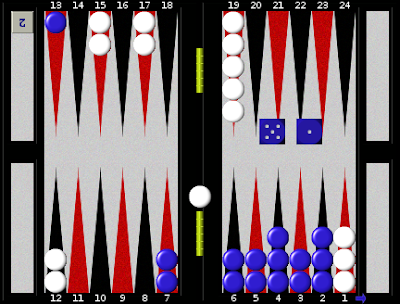 13 point match, White leads 4-2, holds the cube and has a checker on the bar. Blue has a 5-1 to play and plays 13-7. If you have been following us so far I am sure that you can do better than this and the outstanding play is 13/8, 7/6. Again we choose to pay off to the 6-1 joker in order to start clearing the bar while White is in the air. The danger of White hitting the second blot after 6-1 from the bar is a mirage, as Blue will either pick it up when he enters or return hit. No other play is close. We are still trying to reach a nice smooth bear-off position and we should get to one nicely after the best play. However, after Blue played 13/7, White finally entered and Blue rolled 3-3....... 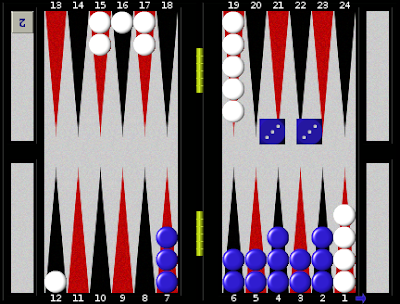 Now Blue finally pays the price, not only for failing to clear the bar earlier, but also for stacking another checker on it! We have arrived at a "Pay now or pay later" position, where Blue can leave a shot now deliberately or play safe this turn and hope that the dice will conspire to bring him home after the wreckage of 6/3(2), 5/2(2).
TIP. Let go of the mouse and think about this one! Make a list of the candidate plays and try to put them in order. Here you can do it making notes, forbidden in live play of course.
These positions, which are not at all rare, are among the most difficult that we face. Here White has no board it's true, but if Blue gets hit it won't be trivial to find his way back home and he may throw an awkward number and have to create another blot. If he plays safe, he has to try and guesstimate how often he leaves a shot later when White will have a board.
So, give it a go. Make your list, put them in order and we'll take a look tomorrow and see how you do. Until then, enjoy the game!
Posted by dorbel at 01:51

Blotting on the three (7/4(3) 3/off) has the advantages that it takes a checker off, gives only 11 shots, and leaves us even-ended, but has the disadvantage that the three point will be hard to cover when missed.

All the other blotting plays leave us odd-ended...

Blotting on the 5 (7/4(3) 5/2 ) has similar drawbacks to blotting on the 3 without the advantage of bearing a man off. And it destroys the four-prime unlike the other plays.

I like blotting on the 6 best (7/4(3) 6/3) . It only leaves 11 shots and should be easy to clear next turn. It gives the best "Trice Wave" structure, so it seems like the least-bad play. Thus my plays in order:

and at the bottom: