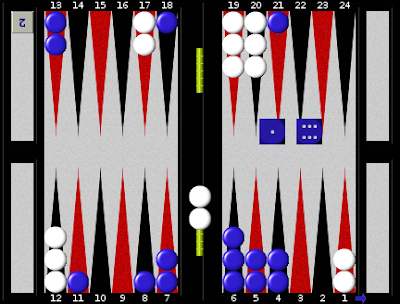 Here's where we left it, Blue (me) is trailing 7-away, 5-away but as you can see is sitting pretty here. Blue has two conflicting tasks, to continue his escape from behind White's little block and also to maximise his chances of closing his 3 and 2pts. Playing 11/4, which I did, dramatically increases the numbers that Blue has to close another point next turn, a whopping 25 numbers in all. However the Gnu rollout (2-ply, 1296 games) indicates that by a small margin, 21/14 is the best play and even 21/15, 11/10 is better than the extra builder. After 21/14, Blue only has 13 numbers to close another point, but of course his escape has got considerably easier. When I first looked at this position (and even now), making the points looks like the priority for me as the escape appears so easy later, so why is the semi-escape correct? There are several factors at work. The first is that escaping the back men is essential. You can't win the game until you have brought them around and home and off, whereas you can in theory win the game without ever making another point! In practice, you almost always will make them however, because the number of checkers available to do so will increase naturally. The number of escaping numbers will, on the other hand, remain the same. The other feature is joker control. If White quickly throws a small double and enters both checkers, it's better that she can't enter and attack Blue's rear checkers simultaneously. The two plays (11/4 and 21/14) are very close here, so you can see that if Blue's escape was any harder it would become proportionately more important to get the back men moving in relative safety while White is dancing. As a general rule, use the window of opportunity provided by White being on the bar to bring the back men round and worry about closing points later!
I promised you an easy counting tip for the numbers required to close a point next turn. Here it is. Looking at the diagram above, we can see that Blue has three points that he can use to make the 3pt. The number of point making numbers is always the square of the points that you can use, here 3 squared is 9, all combinations of fives, fours and threes. If we play 11/4, that number jumps to 4 squared, 16, or all combinations of five, four, three and one. You do have to check that all the doubles work (3-3 doesn't here) and sometimes there is an extra hidden double that you can add, 2-2 here, but at least this simple formula gives you a basic number to start from. Note in the example above, you do get 5-5, even though the 8pt only has one checker. Note too that the running play, 11/4, adds 6-6 to make the 2pt which is nice!
Much later on, after bearing off 8 men, White primed one man and put a second checker on the bar and cashed. So, into game three trailing 0-4 to 7. 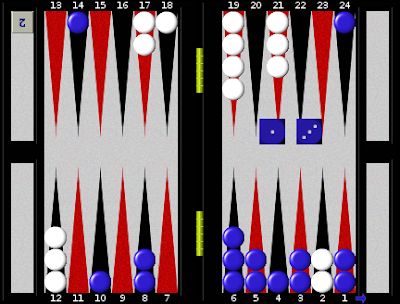 
I've cubed early, trapped White on the deuce point and have a 3-1 to play. Not easy or obvious, what's your call? We'll take a closer look at this one tomorrow, until then, enjoy the game!
Posted by dorbel at 03:32

This is a tough one. I think I'll make the ten-point, since I can't see anything better. Moving the runner up puts it utg, and covering the four point leaves too many blots.