More Bearing Against The Ace Point.


There's always the temptation to look at positions when studying and try to glean from them "answers", that we will remember when we see something like it again. In practice, this doesn't help as much as one might imagine. One checker different anywhere in the board can so alter the essntial nature of the position, that the answer we have "learned" is completely wrong. The purpose of study, in my view, is not so much to learn answers, but to learn how to think. Like chess, in fact to a greater extent than chess, the game can't be memorised.
In a recent 7 point match on Fibs, I lost the first 2 games when my opponent turned around ace point games and the third against a deuce point! What can we learn from this? Let's take a look. 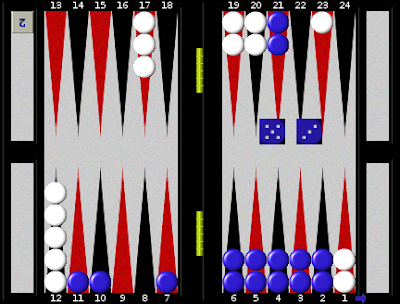 It's 0-0 to 7 and Blue doubled a blitz earlier, but White managed to hang on and anchor. Unlike the positions that I have shown you in earlier posts, Blue definitely does want to make the bar point here. He needs this to prevent White jumping back into the game with 6-6, to eliminate fly shots in the outfield and to keep White under pressure while Blue completes the escape of his back men. 10/7 then and any old five you like. When to leave the anchor is always a thorny question, but here, with the security of a six prime it is clearly right for Blue to go now. White's board won't ever be weaker than this, so 21/16 is the play. White will sometimes be able to trap a checker behind a prime from here, hoping to force Blue to break his prime but it doesn't happen very often and it also has a downside for White. At present, she has fairly good timing, i.e. if there is no hitting, she should be able to build a board and have a nice prime in position when Blue starts his bear-off. If she hits now, she loses timing and Blue gains it, particularly with a dance or two. Still, White can't go too mad here because if Blue can send back more checkers, his gammon chances go up, so she will often elect to eschew the hit for a while. 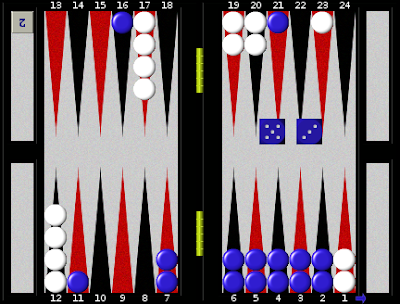 White rolled 4-1 and (probably correctly) decided against hitting. Then I rolled 5-3 again.
I played 21/16, 11/8. Gnu marks this as a small error and prefers 21/13. On a rollout the two plays are much closer, but 21/13 is probably right. Can we say why this is? Making the 16pt makes a point that will have to be broken later, possibly when White's board is stronger than now. It is a sort of anchor, what used to be rudely called a Bulgarian anchor and making an anchor when we don't need it is usually wrong. Why 21/13 and not, say, 16/8? It's usually right to take our chances in the outfield if we have to. Being pointed on is always bad, being hit loose inboard less so of course, but still dangerous, because if we can't hit back, the opponent has a good point slotted. Besides, escape is the name of the game here, so staying on the 21pt can't be right.
There is another reason why 21/16, 11/8 is wrong, one not picked up by the bots and it is this. It applies no pressure to White. After that move, she can play any roll productively and without any chance of making an error. After 21/13 her correct strategy is far from clear and her chances of making big mistakes very real. 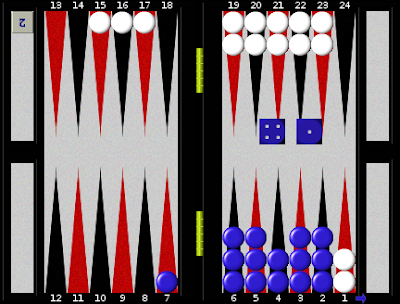 Well, later on I had to leave a blot on the bar and White missed. As you can see, her timing has survived and with a little luck she can keep a threatening board for several turns yet. Note that she can still win with a five point board, but once she gets down to four points in her home board, she is pretty much sunk. Anyway, here's me to play 4-1. Think about how you play this. You can try (a)7/2, (b)7/3, 6/5 or (c) 7/3, 5/4.
I'll follow up on this tomorrow. Until then, enjoy the game!
Posted by dorbel at 00:08

I'd play, b). The potential mayhem of leaving the blot on 7 were white to get a 6 would not be worth the risk.

Look again, none of these plays leave a blot on the 7pt.