In my last post I offered the comment, not original, that the player playing on for a gammon against an ace point anchor is either making a mistake or has already made one. Of course we can all think of exceptions to that. You can suddenly go from "no double" to "too good" in one jump after a big joker sequence, although this is rarer than you might think. Also, the leader in a match often doesn't have a double against an ace point and we'll see an example of that in a minute.
Here's just about the earliest that you can expect to see an ace point double. White opened 2-1, played 13/11, 6/5 and got whacked with a 6-4, then had the misfortune to roll 6-6! 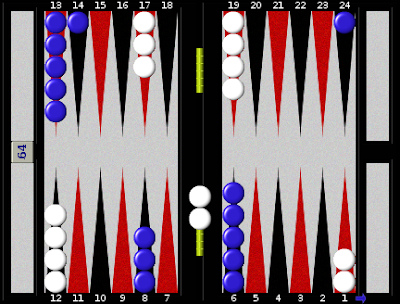 Do you double this? You should, for money and at 0-0, it's already in the window. It's a comfortable take, but weaker doubles than this get passed every day. If Blue trails in the match, the double gets stronger as the lead gets longer and White will have to pass at the GammonGo scores (4-away, 2-away and 3-away, 2-away). As soon as Blue leads though, he isn't quite good enough to double and should wait for a second good sequence before turning it. At 2-away, 1-away post-Crawford, this is one of the positions where Blue should play on for a gammon, although of course at that score, White would hardly have played 13/11, 6/5.

Here's a more orthodox doubling opportunity for Blue. He's escaped his runners and made a point, so although White has a better board, this is the time to turn it. 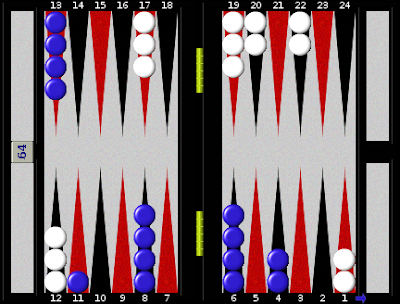 A regular doubling opportunity, just in the window. This is about the minimum that you need for a cube. Blue leads 127 to 145 and his main threat here is to make the 5pt. If he can do that White will have to pass. Blue's path home is far from straightforward and this puts people off doubling. White can still catch up in the race, improve his anchor to the 20pt or bar, hit a fly shot and if push comes to shove, win with a late shot from the anchor, so it's an easy take, but this is the sort of game where as Blue, you want the cube to be on 2. As before, if Blue is the leader in the match, no harm in taking a turn, if he trails the double gets stronger.

I hope that you have already gleaned the priceless information that the score is a very important consideration when cubing ace point games. Here's an example that as Blue I feebly passed in a recent GridGammon match. White leads 6-0 to 13 and cubes. 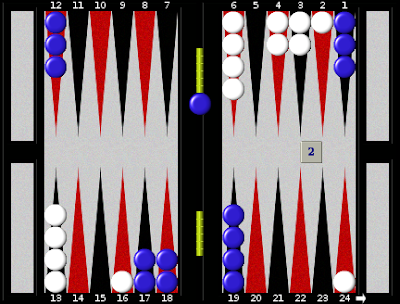 At 0-0, Blue should give this one up, although a take is not outrageously bad. Trailing badly, this cube is a steal and White should not even be doubling. White is an underdog to cover his blot, hasn't made his 5pt and is a bit over-extended at the front, with no points made in his outfield. If Blue can get a checker onto the 20pt, or ideally make it, he has a great game. Why, you may ask, did I pass this one if it is so obvious? Like many people my game tends to be influenced by recent experience more than it should. Several times recently I've taken cubes as the trailer that are money passes and for match too and I just didn't take enough time to really examine the weak points of White's game. Note too that although White's double is technically wrong, he only needs around 10% wrong passes to make it correct and I bet that that is a good estimate here.

One reason why I have delayed this post is that it took me quite some time to find examples of ace point anchor games. There's a reason for this. Strong players don't often get caught in them, because they split the back men early. It is very important for weaker players to imitate this. Delaying the split usually makes for a harder decision later, so break them up early, on the first roll if you can. It will make for easier games for you. Don't be put off by the times that you get blitzed. The alternative, being caught in an ace-point game is worse.
The last tip for today is this. It's tempting for a lazy brain to look at the position, think "Ace point anchor? Pass" and move on. Train yourself to look at every checker on the board before making your decision. The last position above is a very good example of this. Do the hard yards as they say in sport now, a good work ethic pays.
Until the next time, enjoy the game!
Posted by dorbel at 01:01

"At 2-away, 1-away post-Crawford, this is one of the positions where Blue should play on for a gammon, although of course at that score, White would hardly have played 13/11, 6/5."

Why not? It is the best move!

With an opening 2-1, there are really only two plausible plays, 13/11, 24/23 or 13/11, 6/5. Overall, they are about equal, but if you lead in a match you have more to lose and less to gain from gammons, so you should select the less gammonish play, which is 13/11, 24/23. Conversely, the trailer should select 13/11, 6/5 which very long rollouts clearly show is a more gammonish position. This is the mainstream view and not one that, to my knowledge is challenged. The differences are samll but clear.

it is clearly better to slot with 21 if the score is equal and very close om GS if u believe modern rollouts.

Very close isn't "the best move". Slotting is a small but unneccessary mistake. I do believe rollouts, only a fool ignores them, but you have to remember that in order to achieve the same equity as the rollout, you have to play as well as the bot! I think a GammonSave player in the position above will find the gammon easier to save after splitting and the game easier to win if, as usually happens later, the cube is turned and taken.