I agree that making the Golden Anchor is usually right, which is what makes this such a tough play. I have a feeling that over the board I would have done that too, but it's a huge blunder!
Bar/20, 24/22 is best by far. This duplicates sixes to hit, whereas bar/20, 23/20 allows White to attack with ones, threes and sixes. The key feature of this position is White's mini stack on the 4pt. If Blue anchors on the 22pt, these checkers are pretty useless, almost dead for the moment. When Blue anchors on the 20pt, suddenly those checkers come back to life with a useful function, attacking the blots on the 3 and 1pts! Well done Steve for getting this one right.
Use this unusual position as an example of how to think about backgammon. It doesn't mean that grabbing the Golden Anchor is suddenly a bad plan, just not here. Why don't we see this more often? It's a novice match and some odd plays by both sides have taken us into a strange place where an ability to think on your feet is more important than playing by rules that are usually helpful.

Prime v. prime. Hard plays, tough cube action and a favourite playground of the best players, where they hope to make their skill count in positions where big equity swings are possible.
I faced three cube action problems on successive plays in the first game of a five point match on fibs. Here's the first. What is the correct cube action for both sides here? Oh yes, hope you like the new board! Black is on roll. 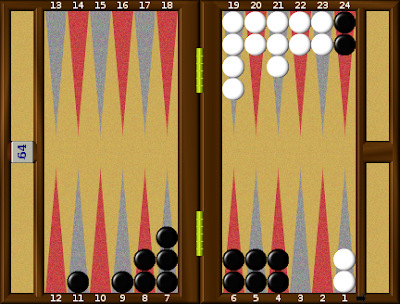 Position ID: ttsDADDYdksAMA
Match ID: cAmgAAAAAAAA
Even though I have a six prime, I just hate to give away the cube while I still have two checkers behind a five prime. Note that White doesn't have to play sixes or fives at the moment which will slow her down considerably, while her two spare fours will keep her board for a couple of turns with luck. Also she has some room to manouevre in my board, as my prime only extends as far as the 4pt right now. Cube ownership is so powerful in prime/prime games, where one crashing sequence can turn the whole game around in a flash, so I decided to wait a turn. Generally I prefer to double people out rather than in when it's a priming battle, but this is however a close pass already and not doubling is a blunder!
Well I rolled 4-1, played 11/6 and White rolled an excellent 6-5 and didn't have to move at all. 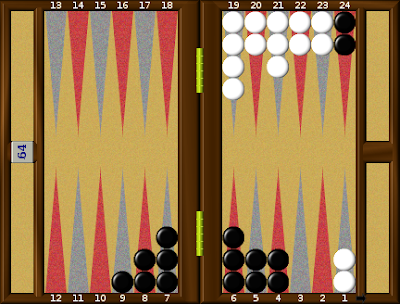 Position ID: ttsDADDY7hYAMA
Match ID: cAmgAAAAAAAA
If I didn't think I was good enough to double next turn, logically I can't here either as I've just got worse. I've burned five pips of timing and White has held her position nicely. It's no longer a cash, but Black should double and White has an unpleasant take.
I rolled 9/3, 6/3 and White's 3-1 was played 24/23, 6/3 (brilliantly I thought) to leave us here. 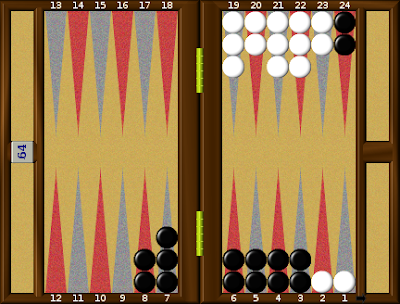 Position ID: drcDAChs2w0AMA
Match ID: cAmgAAAAAAAA
You'll be getting the hang of this now. It's clearly right for me to double, a big blunder not to do so and White has a thin take, pretty much based on cube ownership. These takes by the way would be passes at many other scores, but owning the cube in the first game of a five pointer is worth a lot more than usual, as your redouble gets you to Crawford, so you can get a pass witha 4 cube much earlier than usual.
Allocate yourself a lot more time in prime/prime battles and look carefully at all the checkers. Even one pip somewhere can make all the diference.
I'll try and find you something else interesting for tomorrow. It shouldn't be too hard in this most fascinating of board games. Until then, enjoy the game!