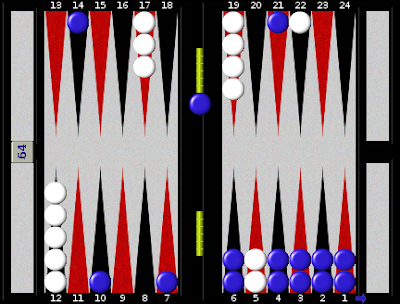 Here again is the position I left you with in the last post. Blue is on the bar and on roll. Blue was playing on for a gammon until he got hit but he isn't too good to double now and he should turn the cube. I don't expect that's a big surprise for you, but White has a clear take which may well be. Blue has only 14 numbers to hit and when he misses, he has five blots to tidy up. Even when he hits, White still has some sort of game if she can enter quickly. In round numbers, Blue is going to win about 64% from here including 30 gammons and a pass by White costs her about 0.2ppg. The play is going to be difficult for both sides, as you will find if you play it for a bit and I recommend that you do that. Of course Blue hit, White dance is pretty straightforward but when Blue misses the fun really starts. Blue will have lots of "Which point(s) do I make" problems, while White will have to decide how much risk she wants to take if she gets a shot. Don't forget also that this is the first game of a five pointer, where the cube is very valuable to White. She can redouble earlier than usual because Blue's point of last take is unusually high. He needs about 28% cubeless for a take.

Now I did say that I was going on to look at 23pt anchors in this post, but before I do that, I just want to talk about doubling against deep anchors. The 24pt anchor on its own is almost always a pass if the attacker has freed his back men and made some useful points. This is regardless of the race. A lot of people play on for a gammon against an ace point, but it's true to say that if they are doing this, they are usually either making a mistake or have already made one. I speak here of positions where the anchor has only two checkers on it. If there are three or more, or if the anchor is combined with another checker on the bar, things may be different. You may be able to double these before your back men are free, or if they have escaped, you might be right to play on for an undoubled gammon. Three men on an ace point anchor is a terrible thing to have and strong players often ship early cubes on the strength of this alone!
The 23 pt anchor is a slightly different beast. It generates almost as many shots as a 24pt anchor but gets gammoned less and if the side bearing in has a couple of points left to fill, it can be surprisingly resilient. It can sometimes be a take, with or without racing chances, because it covers the outfield better and the side bearing in has both the 8 and 7pts to clear against contact.
I'll dig out some samples of cubes against ace and deuce anchors and post them later.
Thanks for reading, enjoy the game!
Posted by dorbel at 00:30